Time is flying by!  We’re already in the 2nd half of March, into the 3rd week of the month.  So what’s ahead?  First a look back; temperatures across the USA so far this month have been cool in the West/East and warm in the middle.  Here in the metro area we’re right at the average temperature so far.

Precipitation has been lighter than average again this month in most of NW Oregon and SW Washington.

We had one brief “wind storm” on the 8th, otherwise nothing real significant has occurred in our area during this first month of Spring.  We haven’t seen a lot of new snow in the Cascades.  But near average temperatures and occasional light snowfall have kept the snowpack on the ground from melting.  Note it’s still quite a low snowpack year with very little time left to catch up now.  Only the NE mountains and Mt. Hood area are reasonably close to normal. 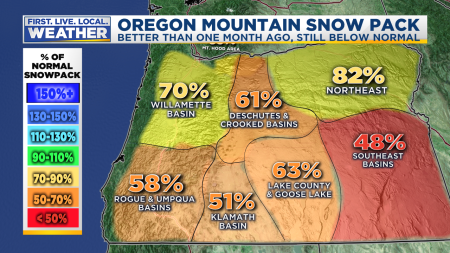 The next two days look dry as most action heads into SW Oregon and California.  But later this week a cold upper-level low settles in just offshore.  That gives ALL of the West Coast a nice soaking.  Note the hefty totals even down into Southern California; this is a forecast from the ECMWF model for the next 7 days: 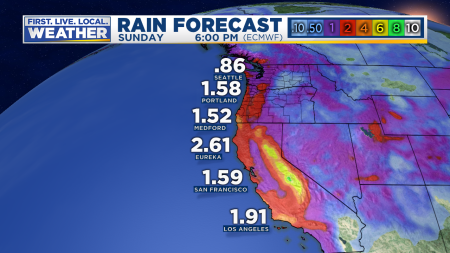 This also means Wednesday through next weekend will feature lowering snow levels with lots of cold lowland showers.  Considering it’s late March, most likely we’ll get some sort of hail/thunder action with the showers at some point between Thursday and Sunday.  We’re overdue for a funnel cloud pic too!

Notice the sticking snow level may go below 2,000′ at times.  That’s why your weather app may be showing snowflakes mixed in Friday/Saturday.

Can we get sticking snow this late in the year in the lowlands?  YES!  It’s extremely rare but it does happen.  The latest measurable snow at either the Portland Airport or Portland NWS forecast office (the past 80 years) fell on March 21, 2012.   0.5″ was recorded that night as a steady/heavy & wet snow fell throughout the Willamette Valley.  It was only 1-2 days away from Spring Break, but it didn’t feel like it.  The pic is from a viewer

I don’t see that coming later this week, but those of you in the hills might see snowflakes mixed in at times.

The ECMWF model shows rain backing off AFTER this coming weekend.  Note the drop off in precipitation intensity around the 26th-27th.

The blue lines in the bottom section are the ensemble average, and each horizontal line in the top section is one of the ensemble members.  So there may yet be hope for some dry weather part way into Spring Break…we’ll see.

This entry was posted on Sunday, March 18th, 2018 at 6:32 pm and is filed under Weather. You can follow any responses to this entry through the RSS 2.0 feed. Both comments and pings are currently closed.

13 Responses to A Typical March…So Far