Not a Typical “La Nina” Winter So Far

Today wasn’t such a bad day with scattered light showers and a few sunbreaks.  No heavy rain, but it was our 8th day with measurable rain in P-Town

Temperatures were mild once again, our 13th day at/above 50 degrees in Portland.

Look at the change from last year!  The first 3 weeks of January have been the warmest in 12 years

This winter (beginning December 1st) has been a bit warmer and drier than average, not what we would expect in a La Nina winter.  Obviously a dramatic change the rest of this month and February could change that to “wet & cool”, but there’s no sign that is about to happen, at least the “cool” part.  There will be plenty of rain the next few days as a series of systems move inland.  And plenty of snow in the Cascades too!  Check out our 7 Day Forecast for Government Camp and Mt. Hood Ski Areas.  This could be the most snow we’ve seen in a week so far this winter!  30-50″ is possible by next Monday/Tuesday 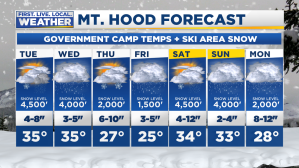 What about in the lowlands?  We’ve only seen one episode this winter where the snow level was close to the lowlands; those 3-6 hours on Christmas Eve when we had the beautiful snow falling in the metro area.  There is no other time we’ve had it in our forecast and remember in the Willamette Valley you’ve seen nothing.   But there ARE two periods in the next 10 days in which we’ll see snow come down into the foothills, and maybe even higher hills in the metro area.  That’ll be this Thursday night/Friday AM and around Tuesday/Wednesday of next week.  You can see it on the ECMWF ensemble model map of 500mb height deviation from average.  First for Thursday you see the below average heights over the West Coast

Then for next Tuesday, the 30th…the same thing

So it appears we’ll wrap up January with at least some weather action…lots of rain and lots of mountain snow.  But what do we see BEYOND the next 7 days?

All models agree that we’re going “back to December”.  By that I mean some sort of upper-level ridging developing just west of the western coast of North America.  Drier than normal seems like a good bet after next Tuesday/Wednesday.  But EXACTLY where the ridge sets up is critical to our weather here.  If the ridge is quite close to us, as the ECMWF is showing right now for Thursday February 1st, we’re headed into an unusually dry period with mild temperatures for early February. 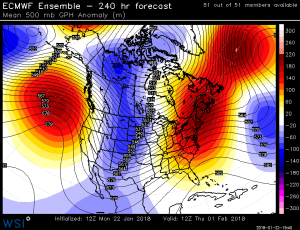 You can see that in the 15 day forecast for 24 hour precipitation from the ECMWF ensembles, see how the average drops dramatically after early next week

But just a slight movement to the west would allow cold arctic or modified arctic air to surge south through Western Canada.  Notice the 18z GFS has the ridge farther west, which could leave the “back door open”

And even stronger from the 5th through 12th of February.

Check out the precipitation departure maps for weeks 2-3-4 of that run…extremely dry:

If that happens then winter is pretty much over.  That pattern would give us lots of sunshine and highs in the 50s.  That seems too simple and would be a strange start to the last month of a La Nina winter.

My gut feeling is that something is up and the ridging could at least briefly move farther offshore.  That would give us another “surprise” like we saw around Christmas with cold air sneaking in from the north.  Most likely that would happen in the first week of February.

For the rest of January though it’s all about rain and mountain snow.  Try to stay dry.

This entry was posted on Monday, January 22nd, 2018 at 6:32 pm and is filed under Weather. You can follow any responses to this entry through the RSS 2.0 feed. Both comments and pings are currently closed.

33 Responses to Not a Typical “La Nina” Winter So Far