Does Your App Show Snow For Next Week? Here’s Why

Did you notice a snowflake or flakes on your app for about a week from now?  This is what our FOX12 OREGON app shows this evening: 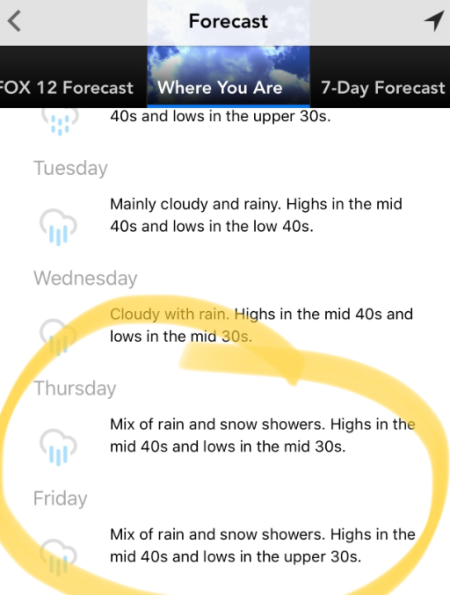 All extended forecasts on apps are automated, so keep in mind it’s just computer modeling without human input.  Here at FOX12 we also put our regular 7 Day Forecast on the right side, you should always look there first.  But wait!  OUR forecast also has snowflakes in next Thursday.

Thursday & Friday of next week we get a cool and showery weather pattern, just like today but maybe 5-8 degrees colder.   Today we were in the mid-upper 40s during the afternoon hours. 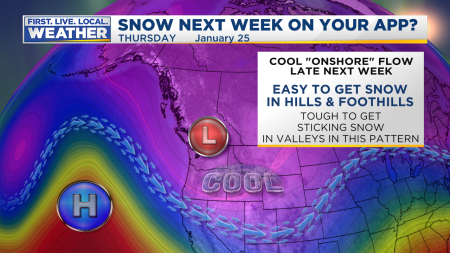 This isn’t an “arctic blast” sort of pattern; there will be no east wind pouring cold air out of the Gorge like we see in our real snow/ice events.  No this is the “wet snow” setup that frustrates so many of us.

AT THIS POINT it appears these showers will be accompanied by “onshore flow” or air flowing from the ocean inland.  That modifies the lowest part of the atmosphere enough that it’s really tough to get sticking snow (more than a dusting) down to sea level where most of us live.  But it is very easy to get sticking snow up around 1,000′ and above in this pattern.   In this upcoming pattern that app forecast is just right.  We’d typically see highs 40-46 in the lowlands and lows in the 30s in this setup and that’s our forecast too.

It’s hard to believe, but THIS IS THE FIRST TIME WE’VE HAD THIS PATTERN THE ENTIRE WINTER!  The only other time we’ve been close to snow in the lowlands was for about 4 hours on Christmas Eve…that’s it!  It’s been a mild winter so far.

So we’ll keep an eye on it, but it’s probably safe to say a lot of us will at least SEE snow in the air later next week, it’s just a matter of whether it sticks at your location.  If you live at/above 1,000′ it looks like possibly next Thursday or Friday you might see some snow on the ground.  But a lot can change in 7 days…

This entry was posted on Thursday, January 18th, 2018 at 7:41 pm and is filed under Weather. You can follow any responses to this entry through the RSS 2.0 feed. Both comments and pings are currently closed.

60 Responses to Does Your App Show Snow For Next Week? Here’s Why