Big Waves On the Beaches Today

30-35 foot waves arrived on the Oregon Coast late last night as expected.  They continued to pound the coastline through the day.  There doesn’t appear to be much widespread damage, but the pictures and video have been amazing!  At midday a large wave smashed into the Sea Gypsy motel/condos.   The wave in action (courtesy of Joel Hernandez) 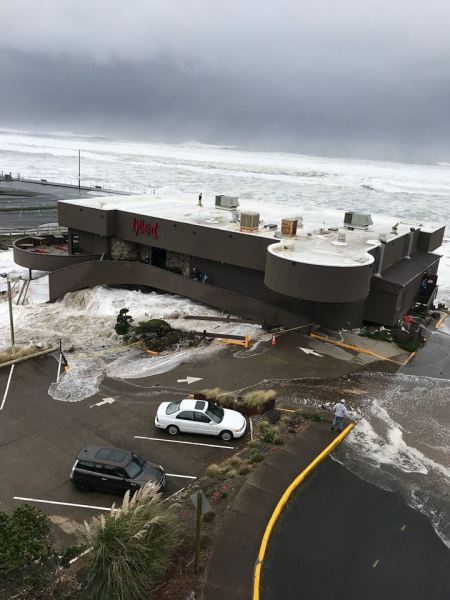 A few pics of the damage from David Willis:

An important point is that this is SIGNIFICANT WAVE HEIGHT, not the highest waves.  These numbers show the average height of the highest 1/3 of waves.  So assuming we’re talking a 32-33′ sig. wave height, that means maybe 1 in 1000 waves passing a location could be as high as double that height!  In fact the NWS noted this buoy measured a 60′ tall wave around 1am this morning!

Where did the action come from?  FAR offshore.  A deep area of low pressure maybe 1,000 miles to our southwest generated a large field of southwest wind.  This is 48 hours ago:

Then 24 hours ago the field of large swell was about to arrive on the coastline: 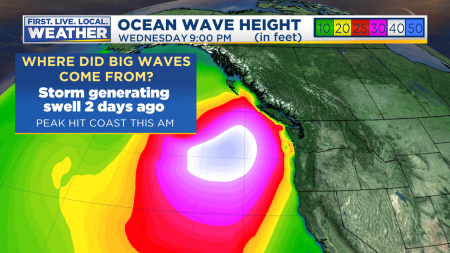 This isn’t quite as rare as you think.  It seems that at least once a winter we talk about 30′ waves, and the folks over at Portland NWS think we last saw conditions like this a little over two years ago, during that stormy December 2015.  That was about the same time as the Battle Ground tornado.

The wave/swell height is dropping now and should be down to around 20 feet by tomorrow midday & afternoon.

It’s amazing nowadays with social media how quickly great pics and video spread from the coastline to…the rest of the world.   20 years ago we would have just received an email with maybe a still pic…maybe.  Quite a change!

This entry was posted on Thursday, January 18th, 2018 at 7:15 pm and is filed under Weather. You can follow any responses to this entry through the RSS 2.0 feed. Both comments and pings are currently closed.

2 Responses to Big Waves On the Beaches Today