Worst “La Niña” Snowpack on Mt. Hood So Far, But Big Snow Ahead!

Remember the excitement in mid-November when heavy snow was dumping in the Cascades and ski areas opened up quickly?  Things have sure changed in two months.

Today we passed an important threshold on Mt. Hood that tells us this La Nina winter is not behaving as it “should”…at least so far. 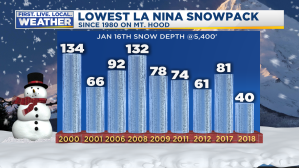 Basically this means in the past 35 years we haven’t made it this deep into the winter season with such a low snow pack while a La Nina winter was in progress.  The sensors were installed around 1980; so we have 13 other La Nina winters to compare this one to.  Notice all of Oregon is in pretty bad shape right now: 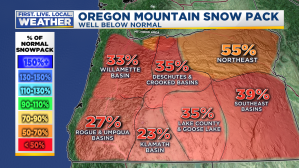 You can read more about what we typically see in La Nina winters by clicking up top on the banner that says WINTER 2017-18 THOUGHTS.  These are winters that are typically known for abundant mountain snowfall and plenty of lowland rain.   But this year we’ve had a mix of a) mild/rainy systems, b) very dry period in December, c) warmer & drier than normal the 1st half of January.

Now it HAS been close to this bad.  January 1996 & 2012 were close, but then things improved the 2nd half of winter.  In fact 1996 was a poster child for how quickly things can turn around in the mountains the 2nd half of winter.  There was only 1″ snow on the ground at Government Camp on January 15th.  A snowy & cool pattern arrived two days later.  In just two weeks, 94″ was on the ground at Goverment Camp!  I remember those amazing two weeks;  cross-country skiing at only the 2,000′ elevation east of Corbett on about 2 feet of snow!

So what’s ahead?  Some good news!  My gut feeling is we don’t have a crazy 1996-style 2 weeks ahead, but I do see quite a turnaround coming the next 10+ days.  A series of colder systems that should bring many feet of snow.  Take a look at the ECMWF ensembles showing a steady accumulation of rain in the lowlands the next two weeks: 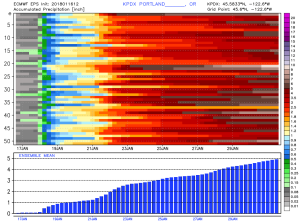 First, we are still in the warm air for tomorrow, so I see one last very warm day.  It’ll be our 9th day at/above 50 this month. 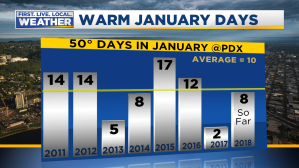 We’ll be within a degree or two of our 59 degree record.  Thursday a cold front moves through the region, dropping snow levels down to around 3,000′ by afternoon.  After that point just about every system during the following week will bring snow to pass elevations and above.   Note the GFS would imply snow could briefly dip into the Coast Range Saturday and/or early next week: 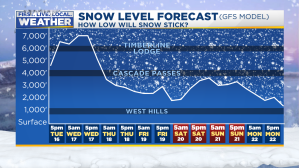 I see maybe a foot of fresh snow on the ground for Saturday skiers, then a bunch more for both Sunday and Monday.  Here’s the ECMWF estimate of snowfall up around 5,000′ through late next week.  3-5 feet, that’s a nice turnaround isn’t it?  I have plans to ski NEXT weekend, the 25th-27th…timing seems to be working out right! 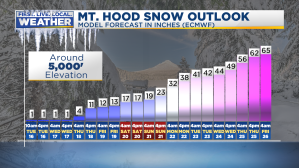 The GFS shows similar totals…maybe 3′ in the next 7 days up there: 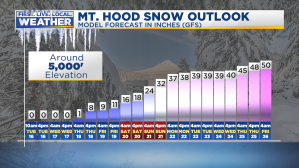 Down in the lowlands I think you know what this means…lots of wet weather and temperatures should cool back to normal.  Maybe even a few degrees below normal next week.  At this point I don’t see a setup for lowland snow/ice, or even a real strong storm.  That’s one other thing that’s been missing this winter (a series of strong storms) but that doesn’t appear to change in the next week or two.

To summarize, the 2nd half of January should be wetter and cooler than the first half, with some nice snowfall in the Cascades.  Things are going back to normal the next two weeks!