This was sure an interesting weekend weatherwise as an extremely early season “arctic front” (leading edge of cold and dry air) dropped south, west of the Cascades, to around the Twin Cities and then fell apart Friday evening as it passed farther south through Kelso.  That’s about what we expected.  That gave a dusting (or more) of snow to parts of Puget Sound.  Then an area of low pressure at the surface moved across southwest Washington last night and this morning, bringing a gusty southerly wind to all areas west of the Cascades in the KPTV viewing area.  On the north side of that low, snow fell all the way down to sea level in spots today.   So Puget Sound ended up with 2 little “snow events”.  One could argue that it’s now SEATTLE 2, PORTLAND Zero for this “winter” so far.

The ECMWF model was by far the best forecasting this event; you may remember the GFS and even the GEM models kept showing today’s low coming right down into NW Oregon to our south.  Well, we now know that COULD have brought snow all the way into the metro area (or for sure the Gorge) IF those models would have been correct.

A surge of cool air (and high pressure) will pour south into Eastern Washington tonight and give us a 2-3 day period of strong easterly wind through the Gorge and into the east side of the metro area.  That begins Monday afternoon and continues all the way through Wednesday.  This will be the first “cold” east wind of the season.  Highs will only be in the 40s, compared to low 60s with the wind last week.  Quite a change!  Keep in mind you can not go to Vista House to experience the wind through the foreseeable future.  Fire never made it to that location so I’m not sure what the reason is for keeping the road blocked 1/2 mile before that point.  Rumor says that MAY be the situation the entire winter.  We’ll see.  But the good news is the dry easterly wind will give us two dry days…Monday and Tuesday.  Enjoy, because we’re going into a rainy pattern starting Wednesday and continuing through the next 10+ days.  Take a look at the ECMWF ensemble 24hr precipitation forecast.  Each horizontal line across the top is one of the 51 ensemble members.  The lower blue part is the ensemble average, showing several peaks of precipitation forecast.

The only real obvious breaks in there are the next two days.  But it gets gloomier; check out the cloud cover forecast for the same period.

Wow…that’s a lot of gray!  The ensemble average for cloud cover is around 80% through the next two weeks.  Hmm, seems like November to me!  Total rain in the next 10 days or so doesn’t appear to be excessive since systems will be relatively weak 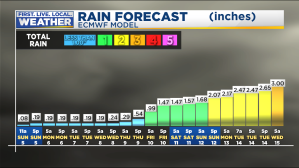 There IS some good news if you are a skier.  Snow levels will rise after tomorrow, and linger in the 4,000 to 5,000′ range through most of the next week.  The result is additional snow base-building at the top of Skibowl and a good part of Timberline and Mt. Hood Meadows ski areas.

I think there should be a solid 2 feet or more on the ground in those locations, not just fresh snow but a building base.  This is a good sign that we might have a good start to the ski season like last year.  #FingersCrossed.  Down at Government Camp it’ll be a mix many days during the next week so you folks will likely lose some of your 10-12″ on the ground right now.

So there’s no sign of a real stormy pattern (wind or flooding), and no sign of low elevation snow or freezing rain in the metro area.  Now depending on how cold the airmass is in the eastern Gorge Wednesday, it’s possible we get either snow or freezing rain out there, but we’ll see about that.  Might just be up in the higher valleys away from the towns.  More on that in the next two days.