FAKE WEATHER: No, It’s Not Going To Snow In Portland Next Week

I’m on a day off, but was just summoned by a coworker wondering whether it’s going to “snow next week in Portland”  due to something read in a local newspaper.  I immediately came running in out of the warmest temperature we’ve seen this late in October in 42 years to see what’s up.  I checked all the models.

Nothing says SNOW to sea level, or below 1,500′ elevation for that matter.

So if you use a weather app…it has to make a decision which model to use.  Then that automated forecast ends up on your app, without any human input!

I see the same app that focused on one cold overnight model (snow close to sea level), has now corrected itself and looks like this for next weekend, which is probably still colder than what we’ll actually see: 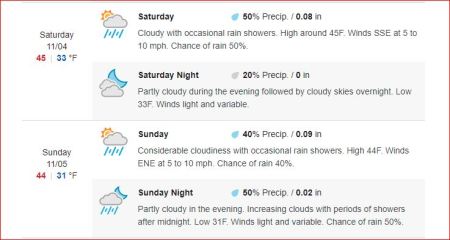 The National Weather Service sure hasn’t forecast snow to sea level (they only forecast 7 days out anyway), and neither has any TV station in Portland.  As of this afternoon no model shows a snowy pattern late next week, just the very cool pattern I mentioned in my previous blog posting.  For the foreseeable future, humans are still needed to interpret computer modeling of our atmosphere.

A far more disturbing issue is the rise of, yes, FAKE WEATHER across the Internet.    Sorry to use the term, but it’s true.  Weather dis-information spreads at the speed of SHARE, FOLLOW, & LIKE.  Scary for forecasters…it gets discussed quite a bit by meteorologists across the USA.

I ‘m disappointed that this time the weather “disinformation” came from what I would typically consider a very solid local source of information, the biggest newspaper in Oregon.  Not quite Clickbait…but close.  You better stick with FOX12; you know as a weather geek I sure won’t leave you wondering about snow the next few months!

By the way, this might be a good time to mention the yearly WINTER WEATHER FORECAST CONFERENCE is tomorrow at OMSI.  There will be a recap of last winter, plus a few outlooks for this winter.  It’s always fun if you are into weather…details: 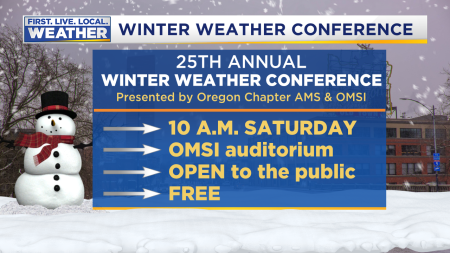