Today we hit 86 in Portland, the 2nd consecutive day we’ve reached well into the 80s

As expected the onshore flow…well, flowed onshore quickly this afternoon at the beaches.  Check out mid-afternoon temps vs. highs yesterday (in red) on the Oregon Coast 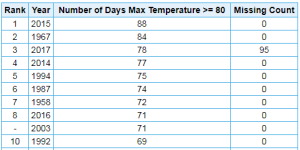 As I’ve mentioned regularly, our summers have been warming somewhat dramatically the past 30-40 years.

Portland averages about 15 more days above 80 than back in the mid-20th century.  That’s great if you live in the foothills or mountains in the summer, but not so great if you live down in one of our cities near sea-level (inland).    I’m bringing up the “80 degree chat” because I think it’s unlikely we hit 80 again this season.  Of course it’s POSSIBLE we hit 80 for the next 3 weeks, but unlikely

Models are showing a normal to below normal temperature weather pattern for the next week or two.  The upper-level pattern is not very wet, with ridging in the Gulf of Alaska.  But we remain on the cool side of that ridge.  Note the Tuesday, then NEXT Saturday GEFS (GFS ensembles) chart: 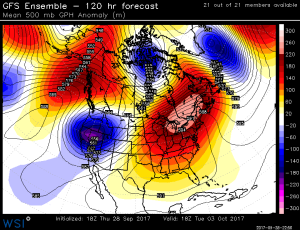 Then the ECMWF showing a weaker ridge, but same general pattern in its week 2 ensemble.  This is the average of all 7-14 day maps

A few thoughts on the next 10+ days based on this:

Showers arrive tomorrow midday and expect more light showers Saturday & Sunday.  ECMWF says less than 1/2″ rain the next 3 days, then we go dry after Monday.  That’s good, I can avoid watering the garden once again…