It’s been a crazy 24 hours!  As expected the Eagle Creek Fire made a huge run during the strong east wind event late yesterday and overnight.

The fire raced 15 miles west from around Eagle Creek to just east of Latourell Falls…in less than 24 hours!  Here’s a 4am fire detection map from satellite, but beyond that time it continued to move westward:

THE BAD NEWS:  Nearly every popular hiking spot and/or waterfall (except perhaps Latourell Falls) from around Bonneville Dam to just east of Crown Point was overrun by fire during the night.  That includes Multnomah Falls (Lodge is okay), Oneonta Gorge and Tunnel, Horsetail Falls, Wahkeena Falls & Angel’s Rest (burned in 1991 fire).  “Overrun” doesn’t mean all the signs, bridges etc… were destroyed.  I just mean that fire passed through or over those areas.  We’ll see the extent of damage in the next few days.  A spot fire also developed across the Columbia River near Beacon Rock. It’s amazing that burning embers made it across the river!  Here’s a pic from Doug Gross, showing the rebuilt Oneonta Tunnel (at Oneonta Gorge) burning last night 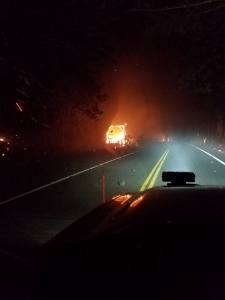 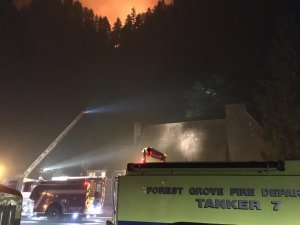 THE GOOD NEWS:  The worst of this easterly wind event is done.  Pressure gradients are about to go flat, which means east wind is gone at Troutdale, Corbett, and almost calm now at Vista House.  By sunset wind should be calm almost everywhere in the Gorge.  There won’t be any dramatic fire movement tonight fueled by wind.  And there’s no reason to think fire will move into the rural/populated Corbett or Troutdale areas based on the weather.  Indeed it would be wonderful if we find out there were no homes burned.  As of this hour I’ve only heard a rumor that maybe one burned somewhere…but that’s not official info.

MORE GOOD NEWS:  Increasing onshore wind flow means a west wind through the Gorge tomorrow, not too strong though.  Then a much stronger west wind Thursday could take the fire deeper into Hood River County I suppose although humidity will go way up at the same time.  In the areas that just burned last night and are burning now.  For example, 1,000′ above Bridal Veil?  Today temperatures are in the 80s  up there.  Thursday and Friday temperatures will be in the 60s with even a few showers possible and very high humidity.  Keep in mind that the area the fire just burned last night is a temperate rain forest.  When the wind switches to westerly in September and the moist air lifts, it gets cool and a bit drippy quite easily!  This should put a huge lid on the fire action.  So again, I think it’s unlikely we see a huge movement of the fire the next 3-5 days anywhere west of Bonneville.  Likely a slow movement.  Hopefully many of the evacuees will get to go home Wednesday based on that forecast.

AIR QUALITY:  It’s terrible over most of Western Oregon right now.  In fact AQI is up around 200 at PDX. 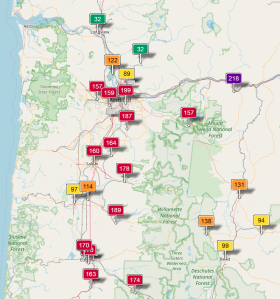 Increasing westerly wind late tonight and especially Wednesday should gradually clear things out.  I expect us to be in the GOOD category in western Oregon by late tomorrow evening.

On a more personal note, I left during the 10pm show in a hurry last night because MY home was in a Level 3 evacuation area southeast of Vista House.

Surreal is the overused cliché of course, but that’s exactly what was going on last night up in the Corbett area.  Typically at 11pm or so on the way home I might encounter a car or two…maybe.  Instead it was a steady stream of cars, trucks, motorhomes, & horse trailers driving around.  Meanwhile smoke was falling, the wind was blowing, and the temperature was hovering near 90 degrees at midnight in September!  Yet there was no panic, people were getting organized, gathering their belongings, and leaving.  There was no freak out at my home since no orange glow could be seen in any direction and I don’t live in the “east wind zone”.  I would have moved much faster if I would have seen flames!   We stayed with family in Troutdale last night.  Chickens, ducks, & cats are just fine and of course the fire never made it to my home.  Apparently it was within a half mile though.  Luckily the wind has now switched and I’m confident (as mentioned above) the immediate threat has passed.  Close call!  It sure is interesting that I wasn’t worried about “my stuff”.  The legal documents, private info, old pictures, and people/animals are really all that matter in a situation like that.  With insurance all the rest is replaceable.

I know it’s a bit early, but I see headlines already showing up along the lines of “THE GORGE WILL NEVER BE THE SAME”.  I think that’s too dramatic.  How many of you knew a similar (but smaller) fire churned between Multnomah Falls and Angel’s Rest 26 years ago this month?  You can’t even see the effects now except for a few silver (burned & dead) trees sticking out.  Two things will happen  1) Most likely there will be unburned green trees mixed in with burned trees & 2)  This is a rain forest, so next spring the ground cover and lowest shrubs will be green again surrounded by silvery/burned trunks of dead trees.  Then new Douglas Firs will sprout and within 10 years they could be 15-20 feet tall!  Nature heals quickly in a wet place.

This entry was posted on Tuesday, September 5th, 2017 at 4:00 pm and is filed under Weather. You can follow any responses to this entry through the RSS 2.0 feed. Both comments and pings are currently closed.

51 Responses to Tuesday Gorge Fire Update; Much Better Conditions Ahead