Wednesday was so refreshing with some morning clouds, afternoon sunshine, low humidity, and no fire smoke.  At least west of the Cascades there was no smoke.  A different story in Central Oregon…yuck!  Check out the view from low earth orbit yesterday afternoon.  Bend and Redmond are down in that muck.

Today will be similar with another push of morning cloud cover followed by a quicker breakout to sunshine as northerly flow develops.  Enjoy the “cool” because the heat is coming back big-time.  First, a quick look at Summer 2017 since technically it’s over after tomorrow; September arrives Friday.

SUMMER 2017 WILL LIKELY TIE 2009 AS THE 2ND WARMEST ON RECORD.  June was warmer than normal, July was close to normal, and of course August has been a scorcher. 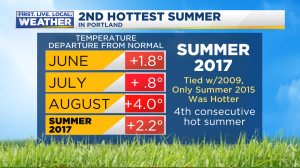 And what most of you probably noticed…this summer was far sunnier than normal.  In fact from June through August we saw less than half of our typical number of “cloudy days”.  That’s defined as 80% cloud cover or more for any one day. 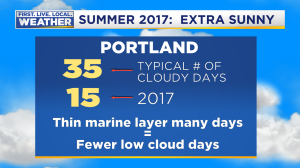 It’s been drier than normal, in fact 2017 WAS THE DRIEST SUMMER SINCE 2003 IN PORTLAND.  That said, summers are almost always quite dry around here, so this time it’s just been a “little drier”

So once again we’ve had a hot summer, this is the 4th consecutive warm/hot summer in the Pacific Northwest.  As mentioned in an earlier post, our summers have been warming, and the warming is even more dramatic in some other western USA locations.  A quick check of Missoula, Boise, Salt Lake City, Reno and a few other cities show similar summer warming.    We’ll see if the trend continues the next few years.

As of this morning, we’ve seen 18 days at/above 90 degrees in Portland; I think there’s a good chance we’ll add 6-8 more before September finishes. 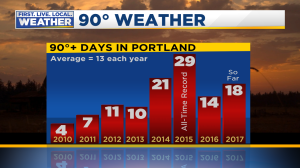 Now let’s look ahead, but the view isn’t a good one.  I enjoy warm to hot summer weather but this next week looks terrible.  Why?  I think we are going to have a 5-7 day episode of thick fire smoke combine with hot temperatures.  Yuck!

How hot is it going to get?  This is our current 7 Day forecast

All the ingredients are there for a rare 100 degree day in September Saturday, and possibly again Tuesday next week.  First, we have a strong upper-level ridge developing this afternoon.  It’ll look like this Saturday: 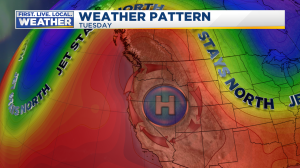 When the ridge is sharper, we tend to get strong offshore (easterly) flow.  That can lead to extreme heat situations in the warm season.  For example, when we hit 105 on September 2nd, 1988, we were in a similar situation.  That day we saw our warmest 850 millibar temperature ever recorded during a Salem weather balloon sounding.  It hit +28 celsius up around 5,000′.  You can see it in the balloon sounding climatology here: 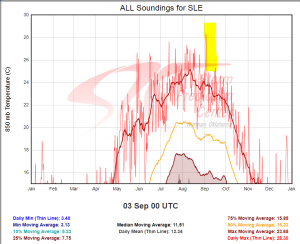 Here’s the issue, models are showing the temperatures Saturday through Tuesday will be equal to that value…somewhere between +26 and +29 C.  If we were to get offshore wind flow any of those days, we could go over 100 in September for the first time in almost 30 years.  As of now it appears Saturday and Tuesday hold the “best” chance for that to happen.  But there’s one big “fly in the ointment” as they say…FIRE SMOKE.  For at least 5 days, starting Saturday, the wind flow will be from the south & southeast above the lowest few thousand feet.

There are many fires putting out huge quantities of smoke to our south and southeast, but there won’t be much low-level wind to get rid of smoke through that period.  As a result there is an increasing change we’ll have record September hot temperatures under a very dense layer of smoke this weekend and early next week.  The smoke could be as thick as what we saw with those Canadian wildfires back in early August.  That won’t be any fun, but it could put a big dent in our forecast temperatures; that’s the reason I didn’t go totally nuts with highs up around 105 either Saturday or Tuesday.  We may just stay in the 90s if the smoke is real thick.

Regardless, if our 7 day forecast is correct, or even 2-3 degrees too warm each day, the first 6 days of this September will be the hottest start to the month we’ve ever experienced!

The flip side to this is unusually cool weather to our east.  On a Facebook TV meteorologist group there has been some discussion of the unusually chilly middle/eastern USA.  One broadcaster in Oklahoma mentioned that this “cool” August is almost unheard of.  Interesting.

This entry was posted on Thursday, August 31st, 2017 at 8:45 am and is filed under Weather. You can follow any responses to this entry through the RSS 2.0 feed. Both comments and pings are currently closed.