Today was an insanely hot day in the Portland Metro area; all official stations were between 102 and 105 degrees.

Of course this broke a daily record, and came within 2 degrees of our all-time high temperature. 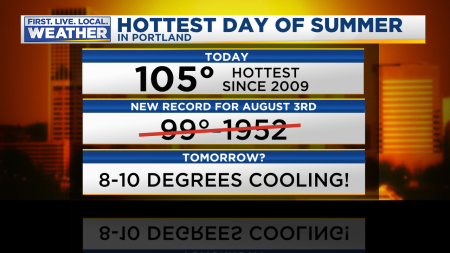 Up through 3pm most metro locations were running a degree or two cooler than yesterday, leading me to believe we’d top out around 101 to 102 degrees.  Then from 4pm-5pm the hot and dry air overhead suddenly “mixed down” over the city.  No, we didn’t get a dry easterly wind, that had already disappeared in the Gorge.  Instead you can see it by checking the dewpoint.  At 3pm it was 57.  By 5pm it was down to 45.  That’s a very dry airmass poking down to the surface; the reason for the sudden jump in temperature.

Here are a few other temperatures west of the Cascades, notice slightly cooler highs in Salem and Eugene 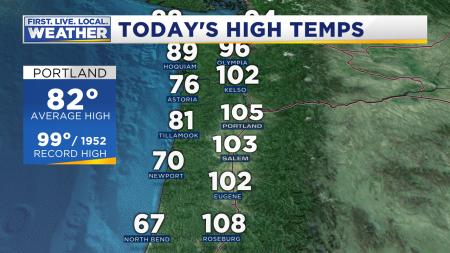 One other unexpected event was the overnight lows; many areas were cooler than I expected, in fact PDX ended up 4 degrees cooler than forecast.  Yet on many hills around town the breeze from the north or east kept blowing, keeping temperatures in the 70s.  The warmest I could find in the metro area was the Sunset Transit Station at 77. 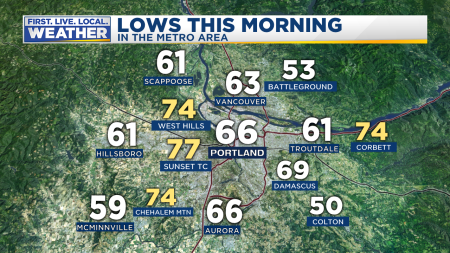 So after two blazing hot days we have some cooling coming up…about 10 degrees cooler tomorrow then another 5 degrees cooling Saturday.  That means we’ll spend most of Saturday in the 80s in the metro area…much better than today!

The bad news is that the upper-level ridge, although weaker, is going to linger along the West Coast for another 7 days.  Models have gradually been shifting to this solution over the past two days.  You see that in the 500mb anomaly map from the ECMWF ensembles for Sunday and again Wednesday (click for better view)

This means even though 100 isn’t likely again, temperatures will RISE again Sunday through the middle of next week.  IF we have a high of 90 or above Saturday, it’s likely we’ll see a stretch of 11 days at/above 90 degrees in Portland.  That would be our longest stretch, after 2009 & 2015

There is good agreement among the ECMWF (and GFS) ensembles for the sustained heat for one more week:

But the sudden change about 11-12 days from now is something to watch.  Ensembles from both models are trying to bring a trough much closer to us for much cooler weather about a week before the eclipse…but that’s still a ways off.  Try to stay cool the next 7 days!