103 IN PORTLAND TODAY: HOTTEST IN 2 YEARS

Final numbers are in and they look like this: 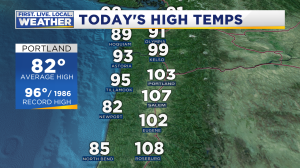 Note the 107 in Salem and 108 in Roseburg…are we still west of the Cascades in Oregon???

They were both just one degree off the all-time high, but saw the same temperature two years ago during that late July heatwave in 2015.  But Medford has beat us all, those folks just endured their hottest day since I was 12 years old…that’s a long time!  But no stations in Oregon reached all-time highs…we knew a few would be close. 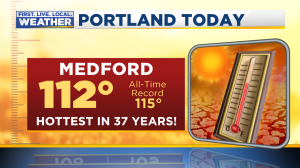 It’s a scorcher out there at this moment.  Tons of smoke has been in the air all day too.  It feels like we’re in some sort of southern California weather hell don’t you think?

The official highs are not in yet, but Salem has hit 107 and PDX 103.  That’s only one degree off your all time high down there in Salem.

Believe it or not the fire smoke has probably kept us a degree or two COOLER than we could have been.  At 2pm I checked two different solar radiation sensors (Forest Grove & Corbett) and found they were seeing 5-8% less solar energy today compared to yesterday.

I’ll be on the air from 5-7pm with all the latest numbers and we’ll pull out the radar as well on a perfectly cloudless day…why?  Check out the Whitewater fire which appears to have really taken off this afternoon east of Detroit.  The plume is up to 30,000 ft.  If we didn’t have all the smoke from the Canadian fires we’d be able to see that plume from Portland.

It also shows up satellite quite well near Mt. Jefferson

The fire smoke will be with us again tomorrow, so I lowered the forecast high down to “only” 105 at PDX.   Between now and tomorrow of course we have to deal with tonight.  I think low temperatures will only get down to around 70 in the city, but 60s in most other areas.  Better than a hot night east of the Rockies, but still the warmest we’ve seen since the big 2015 heat wave.

One last note…for the record it IS possible to fry an egg in your car in this weather.  The before and after pics (45 minutes apart) from Gary Kinney: