Here’s a first look at the initial high temperatures for today, a couple of these may change since the cutoff time is 5pm.  Check out Astoria, Tillamook, & Salem! 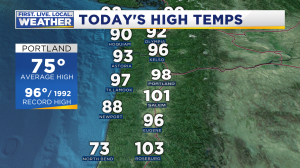 The 93 at Astoria was the 4th warmest temperature on record out there.  The all-time high at Astoria Airport is 98, set just last August.  The 1st, 2nd, & 4th highest temperatures ever observed at AST have been set in the past 15 years.  I think a coastal heat wave blog post is in order at some point…”Is Heat Becoming A More Regular Visitor to the Oregon Coast?”

Most of the metro area cruised in just below 100 degrees.  It’s possible a few of these will bump up one degree since once again the cutoff time is around 4:53pm.  We may have had a little too much easterly wind. 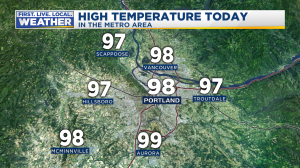 One thing that makes our heat waves far more tolerable than say…a 100 degree day in Louisiana?  The humidity is EXTREMELY low.  Check out the 12% value at this hour!

Tonight will be warmer than last night, but nothing like a heat wave anywhere east of the Rockies.  If it was 98 in St. Louis during the day, I can guarantee you it sure wouldn’t drop down into the upper 50s and lower 60s at night!

That’s because we have that very dry air overhead.  That said, because the east wind will keep blowing at the west end of the Gorge and on some hilltops, those areas will remain in the 70s tonight…similar to those warm tropical trade winds you pay $$$ to fly to Hawaii for?  Tonight it’s free if you live in those spots.  So open up the windows and feel the breezes blowing through…after 10-11pm of course once we’ve cooled off.

Tomorrow’s general weather forecast is easy…SUNNY & HOT.  But the temperature details are very tricky.  That’s because a southwesterly surge of cool marine air moves up the coastline during the night, stalls over the Coast Range the first half of the day, then surges into the CENTRAL & SOUTHERN Willamette Valley in mid-late afternoon.  The timing is critical to reaching 100 or over in the valleys; an early arrival would mean no 100 degree day tomorrow.  If we ignore that southwest push…our atmosphere will be warmer tomorrow and we start with a warmer morning low; easterly flow through early afternoon should mean between 2-5 degrees warmer Sunday in the valleys and then the wind goes calm by mid-afternoon.  This is the perfect setup for maximum heating in the metro area; east wind early that backs off later in the day.  But from Salem south that  afternoon onshore push means your temperatures will likely be capped below 100 degrees.  In this pattern (I’ve seen it many times over my career here), the LAST place to see the cooling is the Portland/Vancouver metro area with a southwesterly surge.  As a result I’m forecasting 101 at PDX tomorrow, 2-3 degrees warmer than today, but down about 5 degrees in Salem.  Eventually that cooler air will make it in here AFTER the peak heating of the day as the east wind disappears too.  That will finish our 3 day heat wave.

Monday should be glorious with a good 20 degree drop in temperatures, then a morning cloud/afternoon sun routine with highs in the 70s Tuesday and Wednesday.

This entry was posted on Saturday, June 24th, 2017 at 6:20 pm and is filed under Weather. You can follow any responses to this entry through the RSS 2.0 feed. Both comments and pings are currently closed.