Hottest Weekend of Summer? Could Be!

Our heat wave is still on for this weekend.  And it’s going to be a scorcher.  This is what we are forecasting as of Thursday evening here at FOX12: 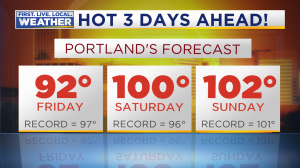 Sunday will likely be the warmest day, that’s based on models showing a weak marine push just beginning to head into the Willamette Valley late afternoon Sunday.  In these cases of a “southwesterly push” of the cool air, the Portland metro area is typically the last to see cooling, or technically I suppose it’s the last area west of the Cascades to see the end of the hot temps.  I wouldn’t be surprised if Portland reaches 102 Sunday but Eugene only gets up to 95 for example.  Both Saturday and Sunday we’ll see perfect “offshore” windflow with a hot airmass overhead combining with easterly wind through the Gorge and down off the Cascades.  This pattern is just about as “perfect” as it gets for a heat wave west of the Cascades if you want maximum heating.  We don’t have many weekends with both days around 100 degrees, even in July or August so it’s always possible this weekend WILL be the hottest of summer.  But we won’t really know until late August of course.

So I think it’s pretty obvious we have a scorcher coming up, but what about the coastline?  The next two days will be cloudless with warming temperatures.  Saturday is the “scorcher” along the coastline since light offshore wind could push high temperatures (especially up north) up around 90 degrees.    Then a southerly wind reversal, which means a push of cooler air scoots north along the coastline, drops temperatures into the 60s or lower 70s Sunday.  A bank of fog/clouds will likely move north too.

And the biggie…isn’t this unusual this early in June?  Yes, two highs right around 100 ARE unusual this early in the season, but it happens sometimes.  Back in 2006 we had a 101 followed by 102 in late June.  Summer temperatures ARE gradually increasing west of the Cascades, check out the change during my lifetime, or at least the part of my life that I would remember:

This is a graph showing average June through August temperatures for ALL stations in the Willamette Valley climate zone.  A few are in cities, but most are in rural areas, so this isn’t just a case of urban heating.  If you’re my age (around 50) and have lived here your whole life then you’ve probably noticed the same thing.  The last 4 summers have been quite warm with 2015 our warmest on record.  Assuming this warming trend continues, earlier heat will become more normal in our lifetimes.  Better get an air-conditioner!