We’re just three weeks into summer but our first heat wave of the season is closing in on us.  So far this year we’ve been as warm as 91 (May 22nd, just before Memorial Day), but June has seen very “average” temps and rainfall.

What’s going on?  We have a strong upper-level ridge developing offshore, that’s a large area of warmer than normal air.  It will move right over the West Coast Friday through Sunday, then weaken and head south Monday and beyond. 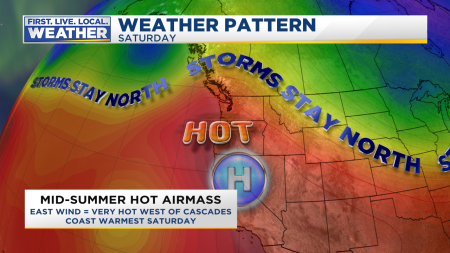 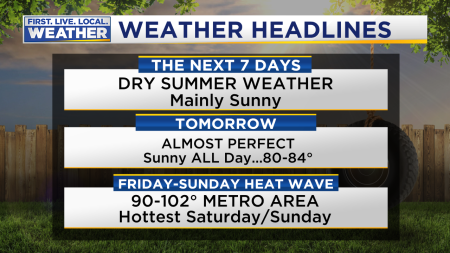 Heat waves are FAR easier to forecast than any other extreme weather in our area.  In fact I can’t remember screwing up a heat wave forecast in the past 20 years.  Sure maybe a 100 degree day became a 90 degree day because of high clouds, but in general we’re talking sunny skies and it’s just a matter of “HOW HOT IS IT GOING TO BE?”.

Well this time the answer is “pretty darn hot!”.  The all-time record June temperature at PDX is 102 degrees, set 11 years ago.

Models are in good agreement that 850 millibar temps over Salem (the temp in Celsius at 5,000′) will peak around 20 Friday, 23-24 Saturday, and 22-25 Sunday.  With neutral to slight offshore flow Friday turning to relatively strong offshore flow Saturday and Sunday, temperatures are going to skyrocket.

How hot?  Looking back at the 2006 heat wave, 850mb temps peaked out around +24 to +25 and we ended up with two 100+ days (101 and 102).  My “magic” chart for June says with offshore flow there’s no reason we can’t hit 100 (or higher) with the forecast temps, especially off the ECMWF model on Sunday; it’s the warmer model that day.  To summarize, afternoon temperatures both Saturday and Sunday will be somewhere in the 97-102 degree range in the Portland metro area.

Will it be humid with this heat wave?  The short answer is NO…good news.

90s at the Coast?  I think that’s unlikely this time around unless we get the east wind out over the beaches.  Mostly likely 70s to 80 Friday, 80s Saturday, and then 60-80 Sunday as c chilly southwest wind kicks in first on the central coast and then works its way north.  Saturday should be the warmest day on the Oregon and SW Washington coastline.

Get your air conditioners and pool ready!

By the way, there is no substantial rain in sight, at least through the end of June.  Check out the ECMWF model’s ensemble of rain accumulation forecasts:

Each horizontal line up above represents one member of the ensemble.  Green indicates .10″ rain accumulation.  Notice only 8 of 51 members produce a tenth of an inch of rain over us through the 6th of July.  That gives some confidence to the idea that we MAY have already entered the very dry season.  If so, vegetation is going to be drying out quickly with the warm temps.