We had lots of snow/ice and cold east wind in December and January, plus the first part of February.  But there has been one weather pattern we’ve barely seen since that stormy period in October.  It’s our typical strong south wind or windstorm pattern when surface low pressure centers tracking north along the coastline.  When that happens a surge of southerly wind follows right behind as air rushes in to fill that vacuum (low pressure).   In a normal winter we see this pattern repeatedly but not this year.  We had that setup way back in mid-October (unusually early) and now it appears a similar event is about to happen on Friday (unusually late).

If we do indeed see gusts that high, this will be the strongest (and only) windstorm since October.  What a way to bracket a cold rainy season, with a windstorm at the beginning and end.

Models first starting showing a strong low moving up the coastline yesterday evening and all morning runs showed the same thing.  Now evening models are almost exactly the same, which increases confidence that some sort of wind event (or storm) is on the way Friday.  Have we ever had an April windstorm?  Yes, but it’s extremely rare.  The last real one was before I was born; April 14th 1967.  Peak gusts reached 60-70 in the Willamette Valley and you can read about it on Wolf Read’s Storm King site.  An interesting quote from Wolf “Since 1972, there apparently haven’t been any significant April windstorms, which approximately coincides in time with the disappearance of the occasional October windstorm”.   Sure enough, I checked the numbers and PDX hasn’t seen a gust over 47 mph in April since this date…during the April 5th 1972 tornado.  The tornado just missed the far west end of Portland airport, near the wind sensor at the time.  A gust to 63 mph occurred with that one.

By 2pm it has moved straight north and is west of Forks, WA

Note this IS the classic path for windstorms in our region…the low appears to track around 127-128W longitude.  Compare this to the track of the October storm (thanks to Wolf Read again):

So this low looks to be slightly farther offshore and not as deep (strong).  Now you may remember that October storm was a bit of a strange one, producing far less wind than expected along the coast but forecasts were perfect for the metro area.  Peak gusts ended up like this: 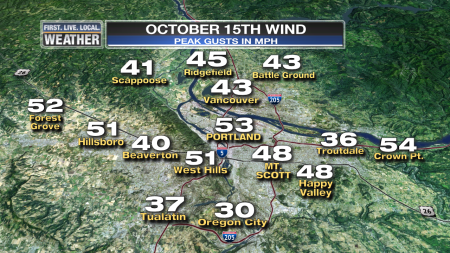 Take 5 mph off those gusts and that’s what I’m thinking for Friday at this point.  You see that in the forecasts above.

There ARE hints in models that the peak wind gusts could be stronger than forecast, that would be over 50 mph in the metro area and 70+ at the Coast.  For example note the WRF-GFS wind gust forecast.  Very clear signal showing 50-60 mph gusts in the Willamette Valley

Another hint of stronger wind…GFS MOS (Model Output Statistics) forecasts 30 mph southerly wind…sustained during this time.  It’s rare to see such strong wind on MOS for the airport location.  3rd hint:  Very strong gusts on ECMWF model…50-60kts (60+ mph)…that’s at least as strong as what it showed for October storm.

One last note.  Even though the pressure gradient isn’t optimal for a big windstorm and isobars don’t have that perfect east/west orientation we like to see for that, the “warm” April atmosphere and good midday sun/mixing will likely make up for that.  We’ll see how it goes.

This entry was posted on Wednesday, April 5th, 2017 at 9:59 pm and is filed under Weather. You can follow any responses to this entry through the RSS 2.0 feed. Both comments and pings are currently closed.