Who Gets Snow Next 2 Days

Today was day #1 of our low snow levels; and it went by somewhat uneventfully with just mixed showers popping up during the afternoon.  In some spots hail or graupel covered the ground.  Check out Corvallis earlier today from Katy Kelly 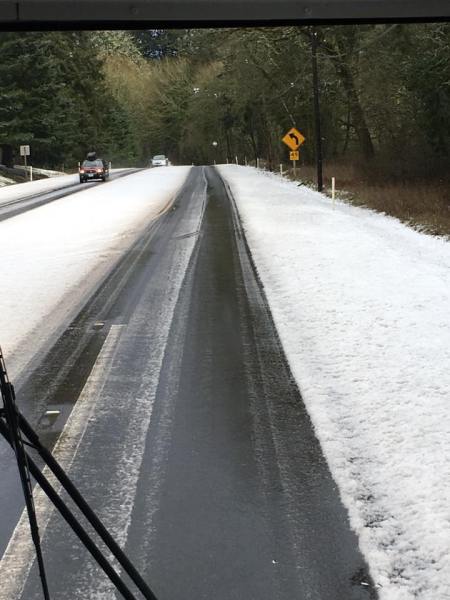 We are under a cool northerly flow in the upper atmosphere with an upper-level ridge over southern Alaska and a trough right over us.  That pattern continues through Sunday/Monday.

So we have 4 more days to go in which it’ll be cold enough for snow to stick down to near sea level in the late night or early morning hours (coolest part of the day) IF moisture shows up at the same time.  That’s Thursday-Sunday.  So let’s take it day by day…

THURSDAY:  Looks just like today with a mainly dry morning, then afternoon showers pop up over the hills/mountains and drift out over the valleys.  Because just about all precipitation falls during the midday/afternoon, temperatures will be too warm for sticking snow below 1,000′.  Even at that elevation you’ll be lucky to get a dusting tomorrow afternoon.

SATURDAY:  Should be a dry day with a chilly start then mostly sunny afternoon.  No moisture for snow even though it’ll be cold enough early.

That leaves us with…

FRIDAY:  This day appears to hold the best chance for sticking snow to sea level, mainly the first half of the day (before noon).  That’s because that little “L” (low pressure center) on the satellite picture above will slide down the coastline through the day, picking up moisture and sending it inland over Western Washington and Oregon.  The ECMWF model (surprise!) has been showing this for two days, but other models have now come into agreement with the general plan.  I’m thinking that ANYONE west of the Cascades could see a dusting, but the best chance is north of Salem and west of I-5.  Actually the BEST chance at the lowest elevations may be up on the North Oregon coast where more moisture will be moving south.  Here’s what I’m using on-air: 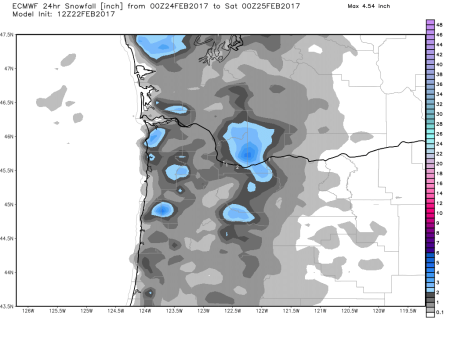 As of now it appears unlikely we’ll see sledding in the metro area Friday morning; however I bet all of us will see lots of snow in the air attempting to stick at times.  In this type of situation a mixing southerly wind often dashes our chance for sticking snow at the lowest elevations.   But in this case there will be very little southerly wind since the low is coming at us from the northwest and sliding by to the west.

Another low moves south on Sunday which COULD give us a Friday repeat.  But the atmosphere appears to be slightly warmer which may keep sticking snow up around 1,000′ and higher, or it may be just barely cold enough again…a very close call.  It is very interesting that 41 out of 51 ECMWF ensemble members produce at least 2″ of snow over the Portland area by Sunday afternoon, lending some credibility to the thought that we’ll get at least a little white at some point in the next 4 days.   That 2″ or more would include both Friday and/or Sunday snow combined.

Beyond Sunday, the chance for snow down to 1,000′ or lower goes away for at least a few days, or for good this season…we’ll see.

This entry was posted on Wednesday, February 22nd, 2017 at 5:58 pm and is filed under Weather. You can follow any responses to this entry through the RSS 2.0 feed. Both comments and pings are currently closed.

22 Responses to Who Gets Snow Next 2 Days