Two Nice Days Ahead, Then Wet

A very slow weather night and mainly slow week ahead as we creep through the final stretch of winter west of the Cascades.

High pressure has settled overhead, giving us another dry day.  East wind has that “end of winter” feel too, not nearly as strong as what we have seen in December and January.   Even the temperature chart shows the last 4 days of 50+ weather are the longest stretch since around Thanksgiving…winter is losing it’s bite!

Tomorrow’s high temps will be around 50 in the metro area under mostly sunny skies, same thing for Valentine’s Day too.

The rain is definitely coming back though, that’ll be Wednesday night and Thursday as a southwesterly flow sits over us for about 36 hours.  This won’t be a flooding event like the last one, I expect less than 2″ in the lowlands during that time.  You can see the precipitation forecast numbers from both the GFS & ECMWF are similar: 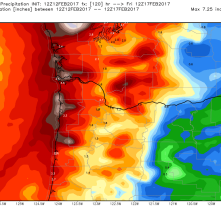 One final note; a hiker turned up missing this afternoon while hiking just west of Multnomah Falls.  Almost all those trails are still in “winter mode” which means tons of snow/ice/downed trees across them and most are shaded from the sun until those higher sun angles of March.  Remember that out in the Gorge it has been cooler with the last ice storm occurring less than a week ago!  This is the one year every generation where you shouldn’t be hiking in the Gorge until we get a widespread melt in March.  It’s not a good idea to attempt hiking through the snowiest/iciest conditions we’ve seen in the Gorge in 30+ years.  Give it time to melt…

This entry was posted on Sunday, February 12th, 2017 at 11:39 pm and is filed under Weather. You can follow any responses to this entry through the RSS 2.0 feed. Both comments and pings are currently closed.

15 Responses to Two Nice Days Ahead, Then Wet