Prepare For Some Brief Snow, Then Freezing Rain

Luckily the general sequence of weather events the next 2 days is still on track from yesterday’s post.  But of course as we get closer to these snow/ice events we can give you more detail.

First, it’s pretty obvious the cold air has arrived.  A very deep pool of cold-air has taken up residence east of the Cascades and is spilling through the Columbia River Gorge.  It’s deep enough that the air is spilling right over the Cascades too; that’s why all of us in the metro area are seeing the strong wind gusts.  That continues through Thursday, then backs off dramatically Friday.  Stay warm!

Tomorrow morning will be dry, or just flurries.  Tomorrow evening is a tough one.  You wouldn’t expect a trace to 1″ snow tomorrow evening to cause a commuting nightmare AGAIN right???

1) A PBOT official mentioned on-air yesterday that they would “consider using salt in the future” which I assume means they have no plan to use it the next few days.  Translation: expect frozen/icy roads = if you don’t have 4×4 and/or chains you may have trouble.

2) ODOT will likely use some salt in spots again (remember how clear uphill/westbound 26 was at Sylvan after the snowstorm?).  If not, freeways could become a frozen hell again tomorrow evening since whatever chemical they sprayed on roads didn’t seem to have any effect during the last two evening traffic chaos events.  Roads froze anyway.

3) Our freeways are jammed in the evenings any typical day; I covered that in the summary of the December 14 freeway gridlock.

IF WE GET LUCKY IT’LL JUST BE LIGHT FLURRIES TOMORROW EVENING, BUT JUST ONE INCH OF SNOW = “FREEWAY GRIDLOCK EVENT” IS A POSSIBILITY

For the metro area I wouldn’t cancel school, but keep a close eye on the radar in case precipitation is arriving hours ahead of time and kids need to get home before 4pm.  If our forecast is correct, buses should have no problem dropping kids off during that 2-4pm time period.  Friday will likely be a snow (ice) day since most areas will see icy roads to start.

Too warm for snow or freezing rain, although maybe a valley near the Coast Range could see brief freezing rain Friday AM.

Models weren’t dramatically different either last night or this morning.  They are all quite light on precipitation tomorrow afternoon evening.  Check out the ECMWF total precip ending 10pm tomorrow 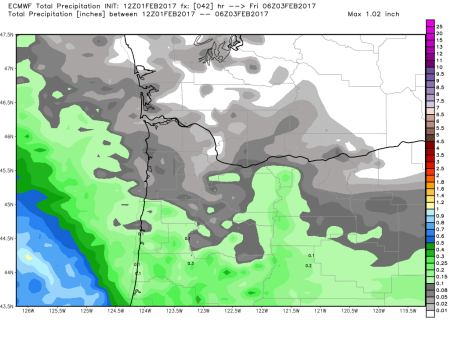 That’s enough for a grand total of 1″ at most, the reason I’m thinking we’ll get very little snow out of this.  Also, there is plenty of above-freezing air moving in overhead tomorrow evening.  Check out the WRF sounding for 7pm tomorrow.

That’s likely freezing rain not snow.  And the warming continues through the night.  While talking to Brian MacMillan this morning we noted that was the ONE THING that models have nailed in every weather event this winter, the profile of the atmosphere overhead.  In general, snow has transitioned to freezing rain when we expected it to in each storm.  It’s actually easier to forecast what’s going on at 3,000′ then here at the surface.  Due to all this I’m pretty confident this is more of a freezing rain event than snow.  No model right now is showing any significant snow west of the Cascades.  The WRF does have some decent precipitation over the mid-valley tomorrow midday/early afternoon, but thinks temperatures may be a little too warm for significant accumulation.

As mentioned yesterday this cold air mass at the surface isn’t as cold as what we saw during the last two events.  So it’ll be easier for temps to rise above freezing in much of the metro area Friday midday/afternoon.

This entry was posted on Wednesday, February 1st, 2017 at 12:10 pm and is filed under Weather. You can follow any responses to this entry through the RSS 2.0 feed. Both comments and pings are currently closed.

32 Responses to Prepare For Some Brief Snow, Then Freezing Rain