Late Evening Edit:  A few new thoughts at 10pm with all evening models in now…updates in red

It’s been a very gloomy day out there with low clouds hanging over most of the metro area.  The good news is Tuesday will be a much brighter day; I expect clouds to break up to partly to mostly sunny skies in the wake of a cold front passing through the region.  The air coming in tomorrow is cooler and drier, thus the increasing sunshine.

Of course what we all care about is that Wednesday-Friday time period I mentioned in the posting Sunday night:

The 2nd half of this week we’ll be in a “conflict zone” in the Pacific Northwest where the colder air from the north moves down under milder/moist air above.  That “zone” seems to want to hang out somewhere near the Oregon/Washington border Wednesday through Friday according to most models.  But details are very uncertain through that whole 3 day period and I don’t have a lot more info to give you this afternoon…we’re just going to have to wait until we get closer (Tuesday) to see if we can get some better forecast agreement among the models.  But I can give you a few more tidbits this afternoon that might help with you late week decision-making…

HIGH CONFIDENCE ON THESE DETAILS:

Will there be school closures?  Not through Wednesday, but we’ll see about Thursday & Friday.  (10pm update)  It’s possible no road issues until later Thursday

Note the preferred ECMWF model is quite dry and/or not quite cold enough all the way through Friday for most areas west of the Cascades:

While the 18z GFS has a dusting to an inch or so.

The 12z WRF-GFS is slightly snowier.

Our RPM is similar with very light snow totals.  But it also thinks it’s above freezing even in the metro area all the way through Thursday midday.  That’s unlikely: 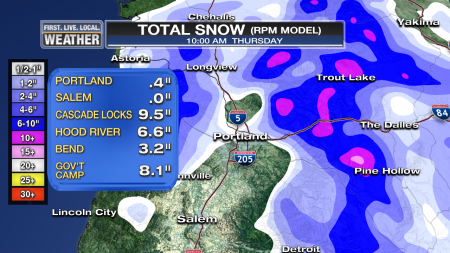 The big message here is that as of this moment no models are showing a huge snowstorm or major ice storm in the western valleys.  But we all remember the January 10th snowstorm though when all that moisture appeared out of nowhere!  A good reason to keep an eye on trends in modeling and satellite imagery of course.

This entry was posted on Monday, January 30th, 2017 at 4:28 pm and is filed under Weather. You can follow any responses to this entry through the RSS 2.0 feed. Both comments and pings are currently closed.