The astute FOX12 viewer will notice a sudden drop in the high temperature Monday…the 2nd of January.   And your weather app is looking quite chilly for next week too isn’t it?   Well it’s looking like we’re going to turn quite cold next week once again.

That forces a cold airmass to dive down through western Canada and into the Pacific Northwest late Sunday through next week.  In general, the pattern is the same on all models.  As a result I’m quite confident we’re headed for a very cool first week of January 2017!

But will it just be cool like earlier this month?  Or could it be a real arctic blast, one we haven’t seen in 3 years (since December 2013).  That’s a good question and I don’t have an answer for you yet.

For reference, I’d consider a widespread Pacific Northwest arctic blast one in which 850mb temps drop down to at least -12 (celsius) over Portland/Salem.  The last 5 times that has happened?

You can see a true widespread Pacific Northwest outbreak of deep arctic air is quite rare.  It’s like the weather geeks (including me) are reaching for that “big one” each winter, but most winters will end in disappointment.

It could possibly happen next week.  The ECMWF model run from this morning was that cold, but other members of its ensembles were not.  Same thing with the GFS model.   Check out the ECMWF ensemble chart from this morning: 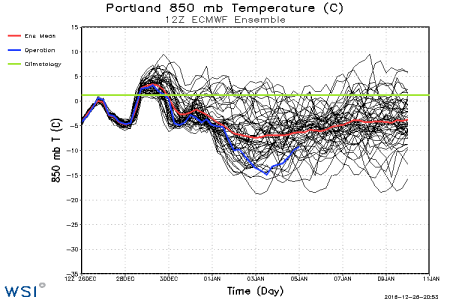 Quite a variety of solutions by next Tuesday/Wednesday, but in general it looks cool. Check out the ensemble forecast temps from the same morning run: 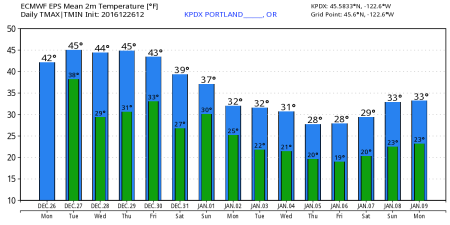 A pretty clear signal for a chilly week ahead…starting Monday.  It was interesting to note that only about 1/2 of those ensemble members showed 2″ or more snow over Portland in the next 8 days, but that number jumped to 46 of 51 members by the 12th day.  The point is that once real cold weather arrives, moisture will likely interact with it at some point.  Especially since the pattern seems to stay cold for a while.  Look at the 1st and 2nd week of last night’s ECMWF monthly run. 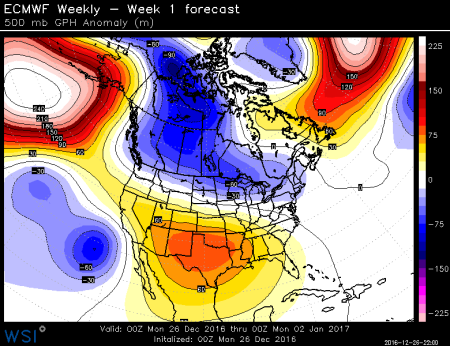 That’s a cold pattern with the upper-high remaining over Alaska and downstream troughing over us.

This evening’s GFS run is not nearly as cold as the ECMWF for next week; it looks more like what we saw earlier in December.  But I’m sure there will be lots of twists and turns the next few days on the models.

This entry was posted on Monday, December 26th, 2016 at 9:40 pm and is filed under Weather. You can follow any responses to this entry through the RSS 2.0 feed. Both comments and pings are currently closed.