The traffic gridlock this evening in the Portland metro area was the worst we have seen in 7 years and many freeways are still jammed going on 4 hours now.  You may remember the surprise snowstorm of December 29, 2009?  That’s the last time we saw this.  Click on the link for summary of that fiasco.

But this storm was perfectly forecast!  At least up until around 5pm when totals started going above that 2″ forecast I gave.  I think too many people decided to wait to leave work until the snow started falling.  So then we had a very compact commute at the same time roads turned icy…what a mess.

The one miss is the northern extent of the snow band.  Instead of stopping around Pacific City to St. Helens to Woodland, it headed north all the way to Longview, Tillamook, & Cannon Beach.  You folks got an unexpected snowfall.

This is what we’ve seen so far, as the main band has pushed to the east.  Officially the total so far is 1.5″ at the Portland National Weather Service forecast office; I assume that number will go up at little:

Definitely a solid inch or so above my 1/2″ to 2″ forecast.  Remember I said a few folks could see 3″, but in reality we’re going to see a few spots up around 4″ instead.  Close enough…

Radar shows the real solid snow has passed on to the east, but the wraparound moisture from a wave moving by will move over our area the next couple of hours.

Post your current conditions and snowfall totals in the comments. Don’t forget to tell us your location.

We’re all seeing the snow now in the metro area with the storm getting started.  Hope most of you are home!

I see a few school districts didn’t release the kids at noon…that could be a problem.

We’ll be live on FOX12 likely the rest of the day.

9am Wednesday: Snow Arrives This Afternoon

Everything is still on track forecast-wise this morning.  Yes, it’s always good to see the forecast train hasn’t flown off those tracks and into a deep meteorological ravine…

Eugene has seen freezing rain since 5am, but the precipitation has not progressed much north of that area.  But we didn’t expect to either.  Radar looping shows very little northward movement of the band so far.

So with respect to start time for snow in the metro area, it still appears significant “travel-impacting” snow (other than a few flurries) will hold off until around 2-3pm.

Temperatures and the airmass pouring into the metro area definitely scream “something frozen is on the way“.  Compared to last Thursday’s east wind event, this airmass is slightly drier and colder down here at the surface.  When precipitation arrives, the temperature will easily fall right back to freezing (after going to 35-37 early afternoon) and then below after dark.

Up above, the morning sounding at Salem is all snow with below freezing temperatures all the way up through the atmosphere.

Morning models are marginally “wetter” with some showing the potential for up to 3″ of snow.  Our RPM has moistened up a bit showing more like 2″ of snow instead of a trace to 1″.  So we MAY get lucky and see a solid 2″ in much of the metro area…maybe. 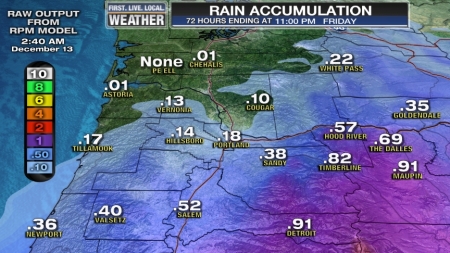 Again, as mentioned in previous postings, the central Willamette Valley has a snowstorm about to begin.  A solid 3-5″ (maybe more?) is likely Salem/Albany/Stayton areas.  We’ll see how that turns out.

To wrap it up, I’ll bring back yesterday’s highlights:

Looks dry, but maybe a rain/snow mix from Newport south, I don’t expect any road impacts.

Same as metro, but 2-5″ totals likely.  Strong wind at the west end will create rough driving with sideways snow this evening