You are living through the wettest October we’ve seen so far…Both in Portland and Salem we’ve never seen a wetter first 17 days of the month.  Here in Portland we’re heading toward 6″ this evening:

But that’s nothing compared to the wetter parts of the region.  Check out some other westside locations.: 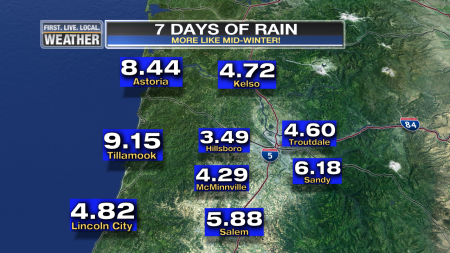 and Coast Range…yes, that’s a foot of rain in just the past 7 days up there! 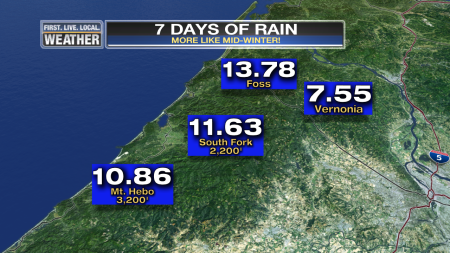 But wait!  There’s more.  The biggest numbers are up in the usual spot just southwest of Mt. St. Helens…over a foot in a half in just a week!

Apparently models weren’t crazy looking for 10″ or more in just 3 days.  There’s a good reason a lot of moss grows on the west slopes of the Cascades, no wonder trees grow so well here!

The rain lightens up quite a bit the next week compared to the past one, but it still looks wet off and on.  I wouldn’t be surprised if another 1-3″ falls by next Tuesday.