It’s been a crazy day with tornadoes, flooding, and even a crack in the ground from lightning!  This from Timothy Dearden in Trout Lake

All 00z (evening) models are now in and they are all slightly weaker (again) with windspeeds both at the coast and inland.

As a result I’ve lowered the forecast slightly:

Here’s my final “pre-storm” forecast, we’ll see how it verifies by Saturday midday/afternoon: 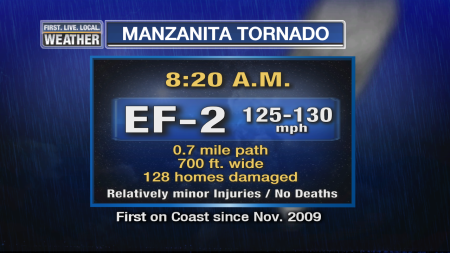 The craziest fact?  This tornado moved directly through the “downtown core” of a small Oregon town.  That’s exactly what happened with the last EF-2 tornado in Aumsville.  That was in mid December 2010.  Take a look at the graphic from the NWS folks: 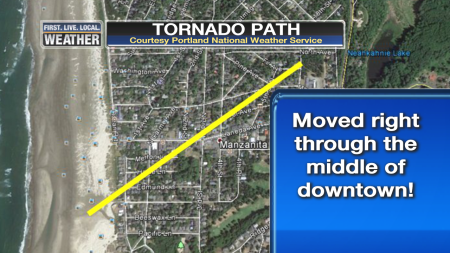 It could have been a quarter mile, or 1 mile, 2 miles etc… in some other direction but instead it went right through the middle of town.  Check out the Aumsville path from 6 years ago:

Crazy stuff eh?  Thanks to the Portland NWS for the quick storm survey.  AND thanks to those hardworking “government workers” for getting out the Tornado Warning BEFORE the storm hit.  I’ve never seen that west of the Cascades in my 23 year career.  Remember that before you lump all of those workers into one (usually negative) category.

Flooding In Portland This Evening

What a crazy 24 hours…high winds, 2 tornadoes, then the heaviest rain rates we’ve seen in almost a year this evening!

Flooding rains fell between 6-8pm in the southwest/southeast/east Portland areas.  Take a look at the daily totals from the Portland HYDRA network of rain sensors.  An inch fell in one our in parts of southwest and inner SE Portland!

The showers have moved east, but lots of flooded homes/cars/roads.

The strongest October storm we’ve seen in years will hit the Oregon Coast midday Saturday, and some of that wind will make it inland as well

Storm # 2 arrives tomorrow and the timing has speeded up.  A deep area of low pressure races up the coastline, much stronger than yesterday’s low.  That means a strong south wind will follow it, first arriving at the coast, then spreading inland quickly. 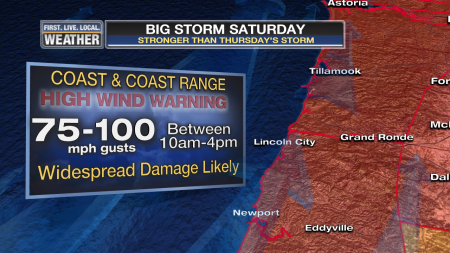 Here are my forecast windspeeds:

VALLEY:  South wind gusts 45-55 mph Noon-5pm  This is quite strong for October and should be a little stronger than the storm that gave us 75,000 PGE outages two years ago in late October.

The wind backs off quite a bit by evening, then all quiet Sunday.

Technical info:  Models are in relatively good agreement on the movement of the surface low now with the 12z NAM and GFS sending a 970-975 millibar low up to the NW tip of Washington by Saturday afternoon.  The 12z GEM was around 967 mb but slightly farther north.  The ECMWF keeps moving slightly farther north with each run and now it is relatively “far” offshore as it passes by Astoria around noon.  It makes landfall on the NW tip of Washington at about 967 mb, like the other models.

So we’ve got quite a deep low pressure center quite close to the coastline on the “classic” track, but the really intense pressure gradients are north and west of the Portland metro area.  You can see it pretty clearly on the WRF-GFS run for 2pm tomorrow from this morning:

That means more of a “typical” wind storm from Salem north to Longview.  The cross-sections and meteograms from the WRF also support no huge storm in the valley.  In fact south of Salem the wind only looks to be in the 30-40 mph range.  For this reason I’m not going to crazy on windspeed and the Portland NWS is doing the same with their 45-60 mph gust range.  Still, as we saw two years ago, 45+ mph gusts can do a lot of damage with (most of) leaves still on the trees.

We’ll be keeping a close eye on evening models to see if there is any change in the forecast track or intensity.

Whew!  Today was the day that was going to be relatively slow, between storms.  Instead some of those heavy showers and thunderstorms produced the first tornadoes on the Oregon Coast since the 2009 event in Lincoln City:

Now that was Lincoln City 7 years ago.  Today a thunderstorm passed over Manzanita around 8:15am.  A waterspout moved onshore and turned into a tornado.

The NWS is doing a storm survey right now.  This is what we know as of now.

Wild stuff…apparently the NWS has only issued 5 tornado warnings in the past 11 years, but issued 10 today!  This was also the first tornado warning issued by Portland NWS since November 2014.