Sunny Sunday to Heavy Rain??? How Did THAT happen?

No one has asked me yet, but lots of you must wondering…

How in the heck does the forecast of mostly sunny and low-mid 70s on Sunday go to rain, possibly heavy at times, and a high around 60???

RAIN HIGHLIGHTS FOR REGULAR FOLKS WITHOUT THE TECHNICAL INFO:

Check out the precipitable water forecast for midday tomorrow:

Looks juicy with 1.5″ or higher!  Lots of subtropical moisture to work with as a cold front drags south across our area Sunday.  The problem with forecasting tomorrow is that each model is a bit different on where the heaviest rain falls and final totals too.  Of course we all know the heaviest rain will be in the Coast Range and Cascades, but I mean north and south.  Does the Salem to Wilsonville area get a heavy rain band early afternoon as the WRF-GFS shows?  That’s .60″ in 3 hours.  I’ve noticed we start having urban flooding issues with several hours of .30″ so even this is at the lower end.

The WRF-GFS has these totals for the entire event…which are pretty reasonable.  That’s maybe an inch to two inches for many of us in the valley, but less for others:

But the RPM (definitely not always a stellar performer) has it right over PDX with several hours of .30″ intensity in the evening hours:

After almost an inch during the day, it then dumps another 1″ in the next 4 hours!  I bet that is overdone.  But the GFS is extremely wet too, showing 2-3″ over the metro area.

The ECMWF is more reasonable than the GFS…

Giving us 1 to 2″ in the metro area but lighter totals (more like 1/2″) down around Salem.

I feel confident saying somebody SOMEWHERE in the lowlands is going to really get dumped on tomorrow, but we don’t know exactly where.  Stay Tuned.

By the way, have you hardcore weather folks noticed this is a pattern that would give us a surprise modified arctic blast in winter followed by freezing rain or snow?  Check out the 48 hour old forecast of 500mb for Sunday PM: 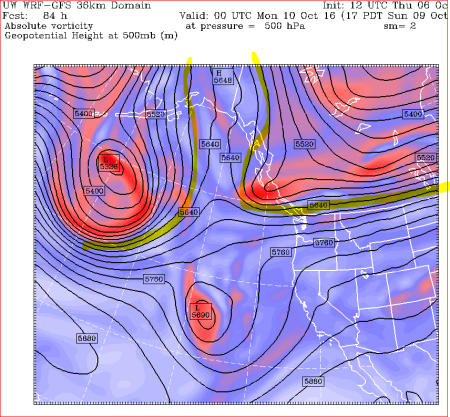 I’ve added the yellow line to show the main flow.  A cool upper-level trough was forecast to stay just to our north (thus the rain forecast up in northern Washington).  Now check out the forecast for tomorrow afternoon but made this morning:

Much better!  In January we’d be real excited about a push of arctic air coming in, or at least just scraping by to the north.  In this October case, that means much drier air for clearing Monday afternoon and then a breezy “coolish” east wind Tuesday for a spectacular sunny fall day.  Then moisture returns with brief offshore flow later Wednesday and Thursday.

As for late next week, it looks rainy and windy…our first real stormy pattern of the season and it’s arriving early.  More on that tomorrow when I’m back to work.

This entry was posted on Saturday, October 8th, 2016 at 5:33 pm and is filed under Weather. You can follow any responses to this entry through the RSS 2.0 feed. Both comments and pings are currently closed.

21 Responses to Sunny Sunday to Heavy Rain??? How Did THAT happen?