Things have slowed down a bit at work this evening so time for a blog post.  I haven’t been posting as much lately for a few reasons.  The most obvious is that it’s a very slow time of the year weather-wise.  Not much to talk about.  I’ve also been busier the past two months since we were short a weather person.  Well, now we’ve hired a very nice Marja Martinez and she’s all up to speed this week.

By the way, if you aren’t following me on Facebook…

then you ARE missing regular weather updates.

Why?  Because as you can see I often post quick images or links quickly to those two social media outlets that don’t make it onto the blog.  It’s much simpler than starting up a blog posting.  Yes, yes, I know social media can be extremely annoying and there are privacy issues as well.  But don’t worry, someone is probably tracking your every view of this blog posting too.  For convenience I’ve also added these feeds to the right sidebar over there >>>

For example, I posted this incredible timelapse from Mt. Hood last night:

September ends in just a few hours and it has been somewhat unremarkable.  Temperatures have been near average and so has rainfall (click for better view):

So now we head into October.  There is more change in October than in any other month in the Portland area.  Temperatures fall like a rock during the month.  At least it’s fast for the mild maritime climate we live in. 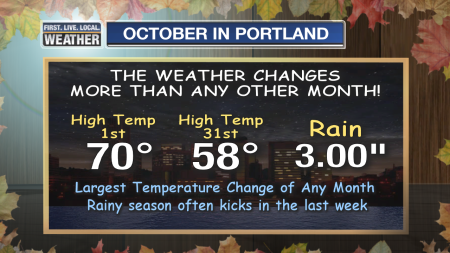 4 of the past 6 Octobers have been quite wet here.  The last two have been real soakers: 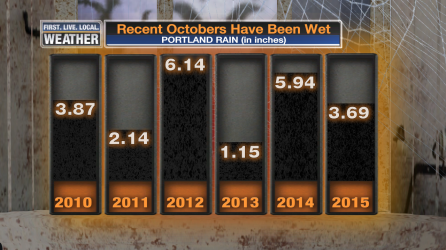 Of course you probably remember the urban flooding on Halloween last year, just about 2″ of that October total fell in the last day!

This weekend we have an upper-level low sliding by just offshore.  It’ll be sending impulses of rain showers up over mainly Western OR/WA this weekend.  Lifted indexes and CAPE values suggest thunder IS a possibility either day this weekend.  Tomorrow we get the usual southwesterly flow spring-type showers.  Sunday is a bit more interesting as the low slides in to the south.  We briefly get into a south-southeast flow before the showers finally end in the evening.  That setup can be good for convection/thunder as well.  So be on the lookout and keep a close eye on the radar this weekend.  Here is our RPM rain total forecast for the next few days.  Not exactly huge rain, but a nice soaking again to gradually ease us into the wetter time of year.

This plus the beginning of October means you can turn off your lawn sprinklers.  Keep an eye on hanging baskets or pots on your deck, but even they should be fine without water for at least the next week.