Today was a cool & cloudy day, but at least our rain forecast was on the wet side.  In the end it rained very little with just light sprinkles/showers at times. 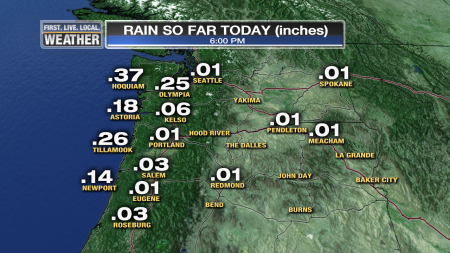 It wasn’t exactly a “windstorm”, but we did see the strongest gust in about 6 weeks here in Portland.  We saw a gust to 27 mph.  Coastal gusts were in the 30-50 mph range…a sign of the wind season to come!

The day started with one of those fantastic Mt. Hood shadows that extends UP onto the clouds. 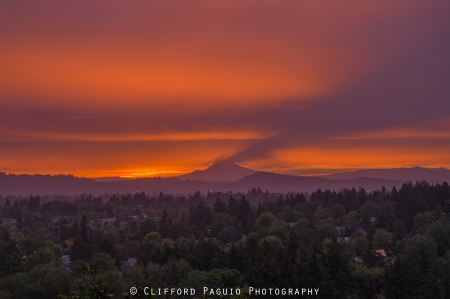 I love that view! It comes from the sun below the horizon shining up through mainly clear skies east of the Cascades.  That first sunlight hits the top of the mountain only, projecting a shadow up on to the increasing high cloud cover spreading in west of the Cascades.  This pic was from Clifford Paguio (you probably figured that out already).

By the way, I was a bit lax this week in posting, partly because the weather was slow early in the week but also because we’ve been busy training a new employee Marja Martinez.  She comes to us from the Telemundo station in Houston.

Looking ahead, a strong upper-level ridge develops directly over the Pacific Northwest over the next 48 hours with 500mb heights up over 590 dm.  That’s a mid-summer quality ridge!  850mb temps soar from +5 tomorrow morning to +20 by Sunday afternoon!  We get about 3 millibars of easterly flow over the Cascades and through the Gorge Sunday afternoon through Monday morning.  Definitely not strong offshore flow, but with such a warm atmosphere overhead that should push our high temperatures into the 85-90 degree range both days.  Those will not be record-setting days since we’ve been as warm as 92-95 during this period.  I checked that 2003 record (95 on the 27th) and found it was +24 at 850mb over Salem with a good easterly flow.

Beyond Monday, we go back to onshore flow quickly and temps return to a more typical 68-75 degree range for the last few days of the month.  The GEFS ensembles and ECMWF both show a cool pattern for later next week and into the early part of October.  Check out those temps dropping off a cliff in the ECMWF 850mb ensemble chart as a cool upper-level trough comes out of Alaska and down over the Pacific Northwest the first few days of October! 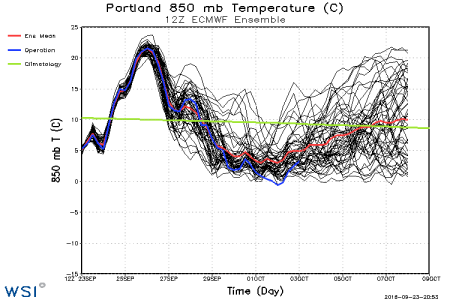 Then the 16 day GEFS ensemble forecast temps for the surface here in Portland: 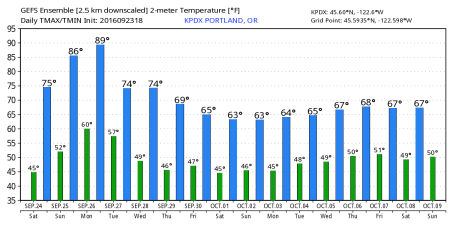 I’m pretty sure we’re done with the 80 degree weather after Monday!

Enjoy the last weekend of September…

This entry was posted on Friday, September 23rd, 2016 at 7:18 pm and is filed under Weather. You can follow any responses to this entry through the RSS 2.0 feed. Both comments and pings are currently closed.