Yes, I know, I didn’t spell EXTREME right, but it’s a more dramatic headline that way isn’t it?

The past 36 hours has been a “textbook case” of what we call the “Orographic Effect” caused by “Orographic Lift”.  No, not orthopedic lift, like shoes, but OROGRAPHIC.  Orographic lift means lifting related to topography.

We happen to have a large mountain range oriented north/south through Oregon and Washington (Cascades), and a decent chunk of the year we get westerly wind flow between 2,000 and 10,000′.  When that air is forced to rise over a mountain range, it cools and has to drop its load of moisture in the form or rain or snow.  Then on the back side of the mountain range the opposite occurs.  The air warms and dries as it moves downhill.  Thus enhanced rain on the “up wind” side of the mountains and less rain on the “downwind” side. 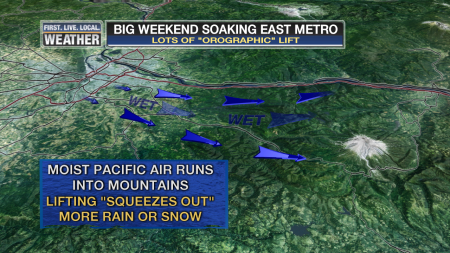 You can see the strong westerly wind on the Troutdale wind profiler over the past 48 hours.  Time goes from right to left (most current is left side).  Sea level is the bottom, and the chart goes up over 15,000′.  I’ve highlighted the main elevations we care about for that lifting over the Cascades.  In winter it’ll be even strong than these 25-35 mph speeds for an even stronger effect.  On the flip side we don’t have such a warm/humid airmass in the winter. 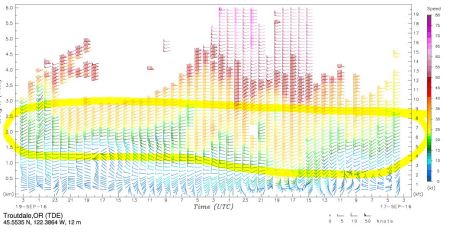 When there is plenty of moisture, as there was this weekend, the difference in rain totals can be HUGE.  Take a look at the numbers from west of the Cascades

The heaviest totals are generally just west of the Cascade crest, which in this case is the Hood River/Multnomah/Clackamas county line.  That extends from Mt. Hood north to the Gorge.  Portland’s water supply (Bull Run Watershed) was wisely chosen to come from this area over and west of the crest.  It’s extremely rare that water is in short supply for a whole year in this area.  Even most dry winters will end up with a wetter spring for recharging the reservoirs/lakes.

Once that air moves east, the opposite occurs.  The air moves downhill and dries out.  Check out Parkdale and Hood River’s totals…yes, only a quarter inch or less!

There was about 10 times as much rain just 15 miles west of Parkdale!  Anywhere east of the Cascade crest is in what we call a RAIN SHADOW.  The mountains are “shadowing” those areas from the rain.  This explains the progression in tree types from fir to pine to oaks to no trees and just sagebrush as you drive from Cascade Locks to The Dalles through the Gorge.  The same thing happens when driving through the Cascades except you go up and down in that case.

I can anticipate a couple of questions:

There you go…now you know why it poured in the mountains but it was just a typical showery day west metro on Saturday.

Looking ahead, this upcoming week will be pretty slow with a weak upper-level low spinning nearby through Thursday.  Just a chance of a shower here and there.  Friday and Saturday it MAY be wetter, but I’m not sold on that for now.

This entry was posted on Sunday, September 18th, 2016 at 9:28 pm and is filed under Weather. You can follow any responses to this entry through the RSS 2.0 feed. Both comments and pings are currently closed.