Pretty quiet on this Sunday evening at work.  For one it’s a holiday weekend but it’s also the deadest weather time of the year.  I find September and the first half of October to be my slowest time meteorologically.  We have passed the summer heat waves, most fire weather concerns, and we don’t get many (or any) extremes.  Yet the rainy season doesn’t really kick in until late October (most years) and we don’t get anything other than weak fronts (most years) until around Halloween.  Not much weather action the next 6+ weeks and I find myself bored more often this time of year than any other.

That said, it’s real clear summer heat is gone and no models show anything extreme in the next 2 weeks.  “Extreme” during this period would mean high temperatures up around 90 or so.  Yet both the GFS and ECMWF show a change after Tuesday’s wet system…a change to warmer than normal as upper-level ridging to our west nudges closer.  Check out the latest GEFS (GFS ensembles) temperature anomaly for the next two weeks: 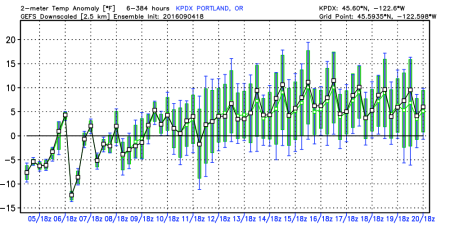 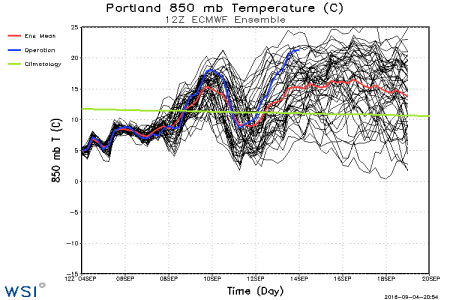 That dip you see this coming Sunday is a trough coming down the back side of the ridge in the northwesterly flow.  That’s the one spot where I could see us getting showers after Tuesday…maybe Sunday.  We’ll see.  Otherwise there isn’t much rain in sight.  So keep watering!  I mentioned that in tonight’s 12 Day Trend on the 10pm show:

Those temperatures next week might be too low, but the point of this product is to give a general idea of conditions beyond the next week.

For Labor Day things are looking good, we’ll go from clouds to afternoon sunshine.  It’ll average out to Partly Cloudy I suppose.  Enjoy the holiday! 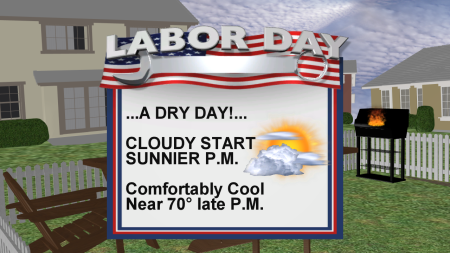