What a scorcher yesterday, as expected.  The highlights (thanks to Portland National Weather Service): 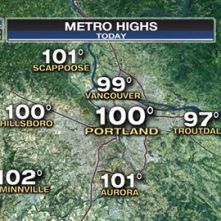 Here’s an interesting tidbit of hardcore PDX climate info, from Chris Callais over on both weather Facebook groups…yesterday appears to have seen the 2nd warmest noon temp we’ve seen at PDX:

The lengthening nights sure make a difference on our low temperatures this time of year.  I see some 50s in the outlying areas even under this hot airmass.  And PDX made it down into the lower 60s once the wind disappeared.  Yet in a few breezy spots in the hills (West Hills and Eola Hills near Salem) it only got down into the lower 70s.  Feels like Hawaii!

I see low clouds have returned to the coast so it will be MUCH cooler out there.  If you head out there (along with masses of others), it’ll be in the 60s and 70s…very nice.

This entry was posted on Saturday, August 20th, 2016 at 6:56 am and is filed under Weather. You can follow any responses to this entry through the RSS 2.0 feed. Both comments and pings are currently closed.