It’s gonna get hot!  Okay, that’s a bit of a cliché but it’s true, I see a real scorcher coming up the 2nd half of the week.

Things have changed a bit in the last 36 hours.  First, a hot upper-level ridge is going to develop just to our west Thursday-Saturday, in the offshore waters of the Pacific Northwest.  No change there, but now models show a small but potent disturbance dropping down the east side of the ridge, bringing a taste of fall into Montana.  The next question is “what does that have to do with us?”.  That cool air is high pressure, so now all models are in agreement we get a strong easterly flow over the Cascades and through the Gorge.   Here’s the Friday 5am surface pressure map from the ECMWF.  The yellow line is the lowest pressure, air will flow toward that “thermal trough” as we call it.  Notice it’s on or even off the coastline at that time = east wind all the way to the beaches. 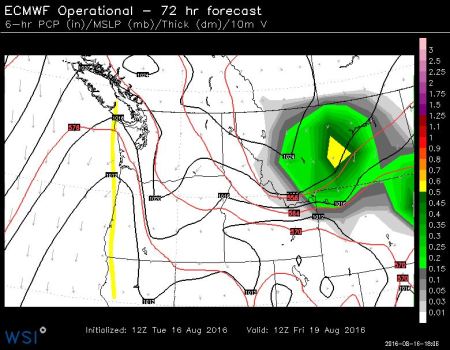 That easterly flow is the “icing on the cake” for a “perfect” heat wave.  850mb (5,000′) temperatures are forecast to remain near +22 to +24 (celsius) from Thursday through Sunday morning.  Such hot temperatures would typically push us well up into the 90s or even about 100 degrees this time of year.  Add in the extra heating as the dry wind races downhill off the Cascades and you can add another 3-5 degrees.  As a result there is no reason we can’t get to 100 degrees or above at some point between Thursday/Friday/Saturday.

On Thursday the offshore flow is just getting going in the afternoon, so I kept the high temperature down to “only” 98 degrees.  It’s sure possible we hit 100 degrees though.  Friday is the trickier forecast because we may have so much east wind blow here in the metro area that it might keep our high temperature “down” a few degrees.  As a result I’ve gone with a 95 for PDX.

Saturday (at this point) looks like the hottest day to me; hot airmass in place, easterly wind to start then it goes mainly calm in the afternoon, and full sunshine.  I put a 100 for Portland that day due to those factors.  Sunday we lose the offshore flow so even though it’ll be hot it should be well below 100 degrees.

Hitting 100 past August 15th is tough to do in Portland due to decreasing sun angle and about 2 hours less daylight than late June.  But check out 3 past episodes including Portland high temps and 850mb temp measured over Salem.  Notice how the atmosphere was overhead in 1977!

The coast is always a very tough forecast during hot weather episodes but this is what I’m thinking right now: 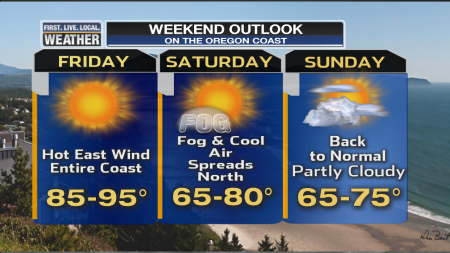 Saturday is the tough forecast day as we get a flow reversal and its southwesterly surge of fog and cool air pushing up the coast.  Friday will likely be the hottest day we’ve seen at most locations along the Coast since September 2014.  That month we saw a day with high temperatures in the low-mid 90s out there!

This whole episode is a bit extreme, but definitely not something “unprecedented” or unheard of in mid-August.  It just doesn’t happen that often.  In fact there have only been 5 days in Portland’s history where the temperature has made it to 100 degrees from the 18th of August through early September.  Interesting that 4 of those happened in 1986, 87, & 88 isn’t it?