Not As Sunny This July

A few people have complained about the “cool” July so far.  It sure hasn’t been “cool”, but about average temperature-wise.  Portland, Salem, & Eugene are running within 1 degree of their average temps for July.  The coastline has been a bit warmer than normal.  Eastern Oregon has been a bit below normal but the next 5 days in the 90s and then 80s should bring you folks closer to normal.

I think what most of us are noticing is the increased cloud cover and lack of extreme heat.

Notice we’ve seen a typical number of mostly cloudy days.  But then note the lack of mostly or totally sunny days: 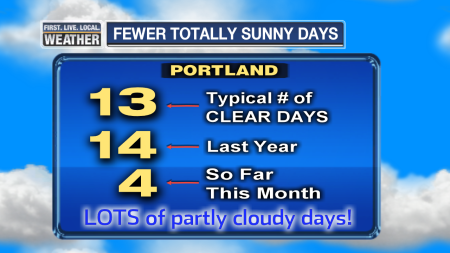 Yes, we’ve had tons of partly cloudy days, but have been missing the real sunny days that we typically get. 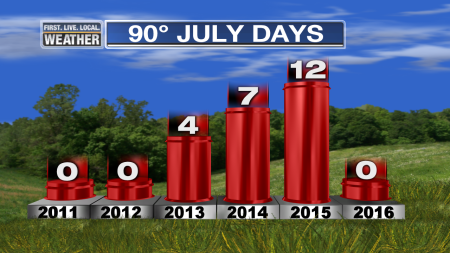 We haven’t had a 90 degree temperature this month.  In fact we haven’t hit 90 since the first week of June, only tallying up 3 so far this summer.  I assume we’ll hit 90 both Thursday and Friday so that will bring us up to 5.  Beyond that it appears unlikely we’ll have another 90 through the first week of August; tonight’s 12 Day Trend was based heavily on the ECMWF & its ensembles…ignoring the trough the GFS keeps trying to bring through next Tuesday: 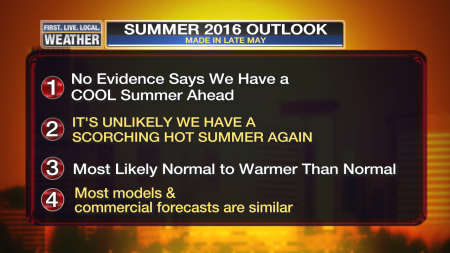 There is one other topic this change of weather the past 7 weeks brings up.  During the past two summers there were some proclaiming that this is the “new normal” and summers are going to be a blazing hot hell (or something like that) from here on out.  No, that’s not how it works.  In a gradually warming climate we will still have ups and downs.  We might have a few cooler summers, then the next period of hot summers could be even hotter.  Who knows, but in general temperatures should continue to warm over the long term…we’re talking over many decades.  Our cooler periods should become less frequent and hotter periods more frequent.