For awhile things were getting exciting in the weather center with 3 different severe thunderstorm warnings for storms over the Cascades.  That was in the 4:30-6pm timeframe.  We saw large hail and then Hans Wipper from Skibowl sent us the best video of the day showing unusually large hail bringing traffic to a halt on U.S. 26 in the construction area west of Govy.

It appears the main lifting has moved north as we head towards 10pm.  So we are probably done with the storms, for sure if we don’t see something in the next 2 hours.  Here’s a chart showing all the cloud to ground strikes:

Everything was on the far east side of the metro area and then up into the Cascades.  Now I know almost everyone heard thunder and/or saw lightning strikes.  I know for a fact that our transmission tower was struck in the West Hills (engineer saw it), so it’s obvious lightning detection isn’t perfect.  Most likely there was plenty of cloud to cloud action too.  Hope you all enjoyed a little taste of the warm season.  We’ll have some short videos on our 10pm show as well.  Here’s a great pic from Happy Valley.  I love the play of the clouds obscuring Mt. Hood, the trees, the strike, and the scotch broom blooming.  Very nice.  Pic by Nathan Zaremskiy 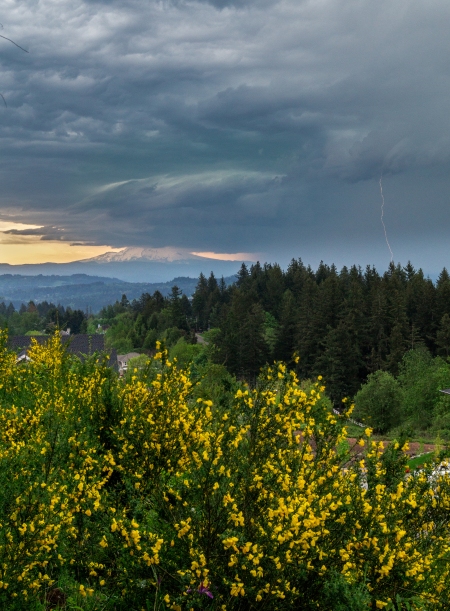 Looks like the first thunderstorms of the day have popped up right over the Bend area at 2:30pm.  Expect lots more on the radar screen over the next 8 hours or so.   Models are all showing increasingly unstable atmosphere over NW Oregon and SW Washington between now and 8pm.  We’ve got that unstable atmosphere, some moisture moving north with an upper-level wave of energy (shortwave), plus a strong low-level push of marine air surging into the valley between 5-8pm.

I’ve seen better setups for thunder in our area, but this isn’t so bad…actually pretty decent for us.  Very similar setups have given us some nice thunder/lightning displays in the past.  Southeast flow aloft is always good, plus I’ve seen the marine push give a little added lift in the past as well.  That’s because it acts as a mini cold front plowing through the valley, pushing the warmer/unstable air up ahead of it.  Take a look at the WRF-GFS showing surface wind at 8pm.  Averaging SW 15-20 mph (that’s windy for a warm evening) running into the NW wind coming up the Columbia River.  I drew in the “convergence” area with the broad highlighter.  That convergence can sometimes work wonders too. 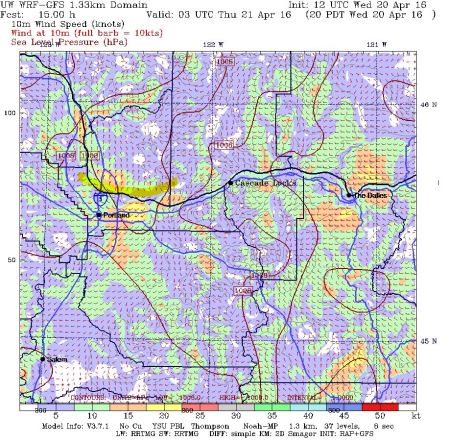 I’ve seen this in the past where storms bubble up right over that boundary.  Always fascinating to watch on radar of course.  The HRRR model is showing much of this nicely this afternoon.  Here’s the 7pm forecast from its latest run:

It also thinks there will be many dry areas.  Here’s the total precipitation outlook through early tomorrow (all of it this evening) from the last two hourly runs of that model:

Not exactly a widespread soaker tonight is it?  But for a few hours it could get real exciting just before/after sunset.

At this point there is no threat for severe weather in the lowlands.  By that I mean thunderstorm winds with gusts over 58mph or damaging hail.  Earlier SPC had put the Cascades in a MARGINAL threat for severe storms, but they have now removed that.

So how can you stay on top of the action this evening?