An interesting evening in the weather center hitting REFRESH numerous times to get the latest maps/models.  Here is the latest:

All 00z models are in .  That’s the one model that was farthest west (offshore) this morning.  If it makes a significant move closer to the coastline Sunday my confidence on a damaging wind event will go up. (Edit at 10:15pm)  Well, it did move farther east, so now models are much closer together.  The 00z ECMWF has the low reaching the western mouth of Juan de Fuca strait at 980mb.  I see a 12 mb pressure gradient from Eugene to Olympia, which isn’t a big windstorm, but plenty windy!

All these models have at least some sort of wind event for the metro area and valleys.  WRF-GFS was a little weaker for us and farther offshore, giving us 13 millibars EUG-OLM. That’s like the ECMWF 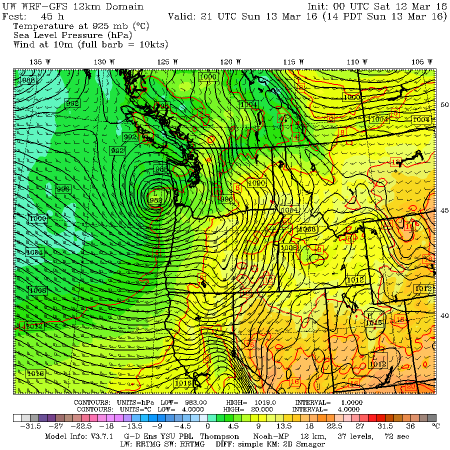 That’s not major storm material, but widespread gusts 40-50 mph.  Of course in that case the abnormally high PDX readings the past two years mean a 55-58 could be seen there I suppose.  Check out the track I plotted over Wolf Read’s analysis of past “classic” windstorm tracks.  The WRF track is the thick yellow highlighter:

The NAM-MM5 was very strong (image below)…that’s a windstorm for us with the low much closer, making landfall around Long Beach instead of up around Forks like the other models.  21 millibars from Eugene to Olympia with the real damaging wind up in SW Washington.

RGEM (Canadian) looked almost exactly the same as the WRF-GFS, in fact the lowest central pressure was around 980 mb. as well.

It is interesting (and helpful if you want a powerful storm) the low is deepening on all models as it passes by.  That’s very important for strong wind.

These storms are always so tough to forecast and each one is slightly different.  For example the Inauguration Day Storm in January 1993 took a similar path and was of similar strength to what the WRF forecasts yet left gusts only in the 40-50 mph range in the metro area.

More updates the next 36 hours if this impending storm holds together!

High Wind Watch For All of NW Oregon/SW Washington

The Portland and Seattle NWS offices just decided to issue a High Wind Watch for ALL of NW Oregon and Western Washington.  That includes all the cities in the I-5 corridor from Eugene to Bellingham.  That’s around 5 million people under that watch!  We haven’t seen one of those since mid-December.

A High Wind WATCH means conditions MAY be right for damaging southerly wind on Sunday in our area.  That’s a HUGE (or is it UGE?) question mark right now.  Thus a “Watch” instead of a “Warning”.  High Wind Watch/Warning criteria means gusts to 58 mph or higher…that is a real windstorm as opposed to these weaker storms we’ve seen much of this cool season that have involved Wind Advisories.  That’s the 35-55 mph stuff.

I’ll reserve any deep thoughts until after the evening model runs tonight for two reasons:

So, there you have it:  We may or may not see strong wind Sunday.  It’s too early to know whether a real windstorm is on the way…we’ll be WATCHING the maps/models closely this evening and again tomorrow morning & evening.  We have plenty of time to see if models come together on a common solution.

Have to get to work early today for something else, but my eye is sure drawn to this…

Both the WRF-GFS & NAM-MM5 forecast a significant windstorm in the valleys Sunday midday/afternoon.   Deepening surface low moves inland over Washington, isobars are perfectly aligned, and 15-20 millibar pressure difference Eugene to Olympia.  Wow, that’s like what we saw in December 2014 or stronger.  50kt gusts forecast over metro area at the surface.

Yet…ECMWF says WHOA!,  the low is headed into Vancouver Island instead and it’s just regular breezy here.  In fact none of its ensemble members from last night, or the operational run this morning have the low close by.