Lots of freezing rain this evening, in fact it was pouring at times over our area.  Radar implies the rain should be tapering off the next few hours.  Then renewed showers during the Monday morning commute.  Temperatures are ever so slowly rising, in fact the lowest elevations are all within 2 degrees of freezing in the metro area.  That tells me two things:

As a result I think the evening commute will be just fine for us…a cloudy day with a few light showers…that’s it.

Be careful driving out there tonight/tomorrow!

Two things are a bit different than I expected today.  But first…what worked out perfect…our first “snowy day” in Portland since February 2014.

Pic by Clifford Paguio.  Snowy/icy roads are widespread (except where the wind blew the snow off the roads) across the area now.  Freeways melted a bit this afternoon with all the gunk thrown on them by ODOT, but they should freeze up again tonight.

The main band of precipitation was a bit later to arrive than I expected, by a few hours and of course most of the snow came from the earlier-than-expected first band of precip.

The other thing that’s a big different is always the toughest to forecast…when warmer air above pushes in and changes the snow to freezing rain, ice pellets, or a wintry mix of the 3.  That has already happened so we are mainly done with snow accumulation.  As a result the totals are at the low end of my 1-3″ forecast last night.  The heaviest snow seems to be from north Portland up through eastern Vancouver…up to 2″ in those spots: 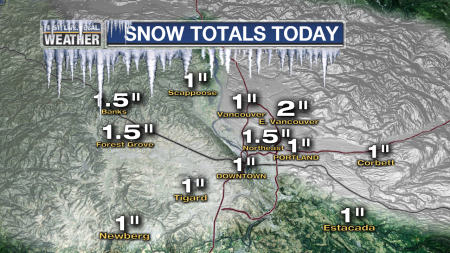 Now that we’ve transitioned to mainly freezing rain, roads are going to really get messy with temperatures remaining below freezing overnight.  Note all current metro area temps (and down into the valley) are below freezing.  The only above freezing spots are along the Cascade foothills in Clackamas and Marion counties…about where models said a warmer layer of air would push north.

More later…we have a newscast right after the Seahawks game in the next half hour or so and I need to get that prepped.

If you have a snow total more than 0.5″, let me know in the comments below.

Wake Up Portland, We Have A Snowstorm!

We’ve had an early “pre-show” of snow today, but the main event is still on!  Everything in the previous posting is still valid.  We have a snow/ice “event” beginning in Portland this morning and for the first time in almost 2 years we actually have a cold & snowy day for the kids (and adults).

(Includes all lowland areas from Longview to Albany)

Sorry about the early arrival, a band of light/moderate snow worked it’s way north ahead of the main moisture this morning.  I got almost an inch out of that one here at home.  Radar shows that decreasing now but the radar is already beginning to “backfill” with additional precipitation.

The short-term HRRR model shows precipitation picking up and coming down steadily from 11am onward into the evening.  Once again it has increased total precipitation up into the .30 to .40″ range.  IF that were all snow, that’s up to 4″.

12z WRF-GFS gives us .20-.30″ precipitation and our RPM has around .30″.  Basically all models are giving us enough for 2-4″ of snow…assuming there is not a widespread switchover to freezing rain or ice pellets.  The WRF-GFS says only a narrow tongue of warmer air moves up the east side of the valley, keeping the mid Willamette Valley in the snow all day too.

For the purposes of the Oregon AMS “first snow” contest we do at the Winter Weather Conference each year, it finally happened this morning.  The first observation of snow at PDX was at 7am.  Technically 6:53am.  Notice the -S  means LIGHT SNOW.  If you chose January 3rd, you are a winner!  I’m not, I chose NO SNOW.  Always a good bet generally, but apparently not this year.