Whew…that was a close one in the western Gorge; but I’m glad I backed off at the very last minute before my 10pm broadcast last night.

There appears to be some freezing rain at/above 1,000′ in Cape Horn/Corbett areas, but below that too warm.  Vista House has seen wind gusts to 70 mph with moderate rain and temperature bottoming out at 32 degrees.  Must not be freezing on anemometer because it’s still working.   Same thing at Corbett except it has bottomed out around 34-35 instead.  Higher up at Biddle Butte (1400′) the anemometer has frozen so you folks will get a lot of ice the next 12 hours.  Maybe a solid inch.  Whatever your temperature is at your location in the Gorge right now, it will not fall any lower today.  We’re done with the evaporational cooling.

Farther into the Gorge the sticking snow level DID drop to river level in the deeper cold air; it appears to be snowing heavily at Hood River too.  Note lots of snow on Cascade Locks and Hood River ODOT cams: 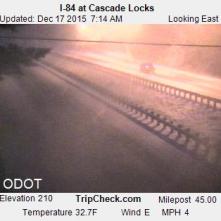 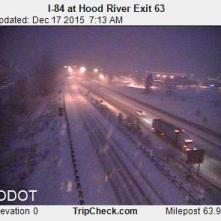 Enjoy the snow out there!

The Cascades are just getting DUMPED on right now as precipitation intensifies ahead of the warm front.  8-10″ new already at Timberline and Meadows.  That snow will change to mainly rain by mid-morning as snow levels rise.

By the way, as the last wave along our wet front passes by late this evening we can expect a surge of southerly wind.  Gusts 35-45 mph are likely in the Willamette Valley for at least a couple hours…probably centered around 10pm-midnight.

This entry was posted on Thursday, December 17th, 2015 at 7:30 am and is filed under Weather. You can follow any responses to this entry through the RSS 2.0 feed. Both comments and pings are currently closed.