I know this is a bit strange…just an hour later.  But I’ve changed my mind after seeing temperatures fail to drop this hour and the HRRR model showing temps bottoming out only in the mid 30s by morning in the central/eastern Gorge.  I think models have overdone the cold/dry air so I’m backing off a bit.  Still a good snowstorm in the hills of the eastern Gorge, but anything frozen is unlikely in the western Gorge except maybe up around 1,000′.

THIS is what I am really showing tonight at 10:45pm: 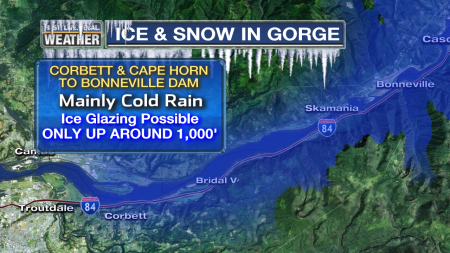 This is what I’m showing tonight on the 10/11pm shows: 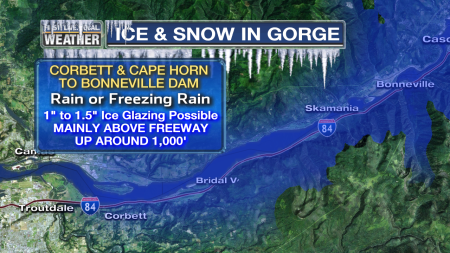 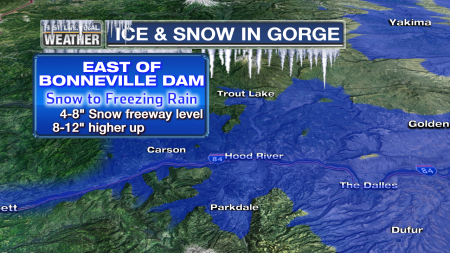 One concern leading up to this event has been that models could be overdoing the cold and/or dry air coming in from the north and east.  I just compared this evening’s WRF-GFS model meteograms with last night’s run.  A very slight warming…we’re talking maybe 2 degrees.  But that could be enough to make quite a difference in ice and snow accumulations.  That should also keep freezing rain above the freeway west of Cascade Locks.  I can’t remember a time where it was 40 degrees at Vista House with no significantly colder air to the east, yet freezing rain is supposedly only 4-6 hours away.  Hood River and The Dalles in the upper 30s with drier air is better for marginal snow accumulation temps there; that’s why I kept pretty much the same accumulation forecast I initially showed earlier.

There WILL be isolated spots in the western/central Gorge that see quite an ice storm;  but it won’t be down on the freeway.

We’ll know for sure by 4am or so, once the evaporational cooling drops temps.

For the metro area…whew, another big soaker coming.  I doubt we’ll see the huge 1-2 hour downpours that caused all the trouble earlier this month.  But a solid 2-3″ of rain the two days is sure going to bring us more mudslide and landslide issues.

Here’s the note I just sent to the newsies…lots of uncertainty late tonight and tomorrow in the Gorge.

Easy forecast for lots of rain the next 36 hours, but Gorge forecast is very tough right now…a HUGE amount of uncertainty in what’s going to happen in the Gorge late tonight:

We get new model info between 7:30-9pm which should give us a better idea how cold it’ll be later tonight when the precipitation arrives.  Sorry to be so wishy-washy, but we don’t like to forecast a huge snow/ice storm when cold air hasn’t arrived and may/may not show up.

For west of the Cascades, lots of rain begins late this evening then continues all day tomorrow and into tomorrow night.  Expect 1.50-2.50” in the lowlands.  Enough for some rivers to return to flood stage and set off more mudslides.  At this time a widespread “Halloween-like” urban flooding event doesn’t seem likely since we don’t see tons of rain in just a couple hours.  More likely a steady moderate rain for 12-18 hours.