11pm Wednesday…This first half of November has been extremely wet to the north and west of the Portland metro area.  Here in Portland precipitation has been about average and a bit below normal (so far) in southern Oregon. 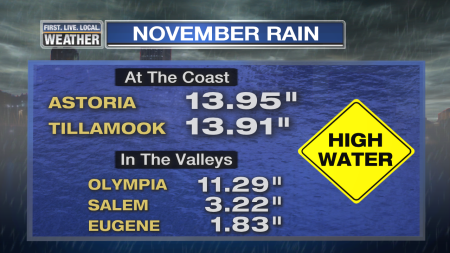 Those Washington and coastal rain totals have been amazing.  11″ at Olympia just a little past halfway through the month…

But things are about to change…I think splitting systems and upper-level ridging nearby will be the dominant theme for the next 10 days.

Next week (Thanksgiving Week!) ridging to our northwest will allow a surge of colder air to slip south.  That happens Tuesday and Wednesday.  Models earlier today were VERY cold, and I didn’t jump on that right away.  This evenings runs of the GEM, ECMWF, & GFS are a bit more reasonable with a very chilly, but mainly dry pattern most of next week.  You get the general picture here:

Is it cold enough that we could see snow?  Possible, but as of now I’d lean towards scattered showers Tuesday and/or early Wednesday and then just turning mainly sunny and cool heading into Thanksgiving.  That’s definitely subject to change since we’re talking about something 6-7 days away, thus the reason I’m not all excited about it yet.

By the way, the 15 day ensemble charts from the GEM/GFS/ECMWF all show the ridging developing early next week hangs around for the next two weeks, but flopping more right over us or just north.  Here are the 500mb height anomaly maps for around December 3rd…two weeks from now.  Click on each for a larger view:

The good news is that the weekend looks really nice with abundant sunshine, comfortable days, and chilly nights!  We should see the most widespread frost so far over the weekend.

I had two days off and flew back into PDX around 4pm yesterday…a bit bumpy!  A huge change to go from warm and sunny southern California to pouring/sideways rain on the way home.  Then 30 minutes after I got home the power went off for the next 5 hours.  My wife didn’t seem to appreciate it when I remarked something like “this great!  Better than coming home to boring 45 degrees and cloudy…”.  She just doesn’t share the weather geekery!

Tuesday’s windstorm was a rare event in the western/central Columbia River Gorge and then out into the Columbia Basin.  The 69 mph gust (near ground level) at Bonneville Dam was the strongest wind I’ve seen at that location.  In fact I can’t remember a damaging westerly wind event in the past 20 years in that area.  Even the sensor at Vista House, all of 18″ out from the stone wall, somehow recorded a gust to 48 mph (direction is broken) from the southwest.  Biddle Butte, at 1,400′ above Cape Horn, had a gust to 59 mph.  I haven’t seen that the past few years either.  Due to those strong winds lots of trees fell across or near I-84 so the freeway has been closed for about 12 hours eastbound.

In Eastern Washington it gusted to 71 mph at Spokane; more damage/outages in that metro area than the 1996 ice storm.  I also saw reference to that gust being the strongest non-thunderstorm wind gust on record for them.  Don’t know if that’s true or not.  But a huge windstorm for the Inland Northwest.

Of course for much of the Portland Metro area the wind wasn’t anything out of the ordinary for November, lots of gusts 30-40 mph, barely even worth of a wind advisory.  This was a Gorge and East of the Cascades event.

The pressure gradients were amazing for this event.  17 millibars from Eugene to Olympia shows the potential was there for much stronger wind in the metro area.  A typical guess for south wind in our area is 3.2 X EUG-OLM gradient.  That gives gusts 50-60 mph in our area.  We underachieved a bit.  And 27 millibars from North Bend (OR) to Spokane!  About the highest I’ve seen.

Models showed a very tight gradient ahead of the cold front, maybe a little weaker than what actually showed up westside and definitely underdone a bit in Eastern Washington.  Here’s the 4pm forecast from yesterday morning’s WRF-GFS:

I checked the 4/3 km high-res run for the western/central Gorge and that didn’t capture the big surge of wind.  We still have some things to learn!

We have a weak system moving through the area tonight on a totally different track.  No dramatic rain/wind issues with this one, because it’s a weak surface low coming right across the central Willamette Valley.  The bulk of the rain/snow is headed south of the Columbia River…maybe .50-.75″ of rain overnight total in the metro area, then drying quickly Thursday.

There is one interesting part; with the surface low approaching wind turns easterly in the Gorge and light easterly in the metro area.  That means snow will fall to relatively low elevations in the central/eastern Gorge.  Note the morning WRF sounding for Hood River at 7am Thursday:

Expect 1-3″ snow up around 500-1,000′ in the central/eastern Gorge overnight.  Just rain at the west end.  It could even be white for the first time this season down in Hood River by sunrise.  Winter is getting closer!