I see this statement (or something like it) winter after winter…“the models were showing X rain this weekend and we only got X much…they suck!” .  More than 50% of the time I think it’s misinterpretation of the model output.

Take a look at the 00z WRF-GFS output this evening for total rain ending Sunday morning.  This is the 36km resolution model:

Definitely a big soaker on the way!  Looks like Somewhere between 2.50-5.00″ at PDX right?  Wow, that could cause some flooding. Salem maybe 2.50″ as well since it’s right on the line between pink and black.  Likely over 5″ in the Southwest Washington Cascades.  Now take a look at the 12km version of the same model:

What?  It says 2.50″ at PDX, less at Hillsboro, and a bit more at Troutdale.  Salem is about the same or a little less than 2.50″.  Now take a look at the GFS model output on our broadcast software:

That is extreme!  Looks like PDX could easily see 6-7″ here, Maybe 4″ out in Hillsboro and a crazy 8″ at Troutdale and Battle Ground right?  Nope.  Here is what I estimate from looking at each of these 4 models this evening:

Why so low?  Two things are going on:

So how did I get those numbers I used on-air?  I generally look for the driest part of the northern Willamette Valley , even if it appears to be way over at Hillsboro or Forest Grove on a map.  That works well in these orographic events.  Keep in mind this applies to meteograms produced by picking a specific point as well.  Here’s the PDX 00z GFS meteogram: 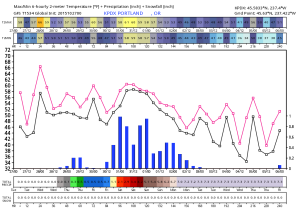 But Hillsboro is far more reasonable…this is what I would expect in most of the metro area:

Of course almost nothing I’ve written applies in showery weather patterns or precipitation coming from a different direction, but our big heavy rain/flood events are almost always under westerly flow.

By the way, yes, we’re going to get a soaking this weekend, but I don’t think 6″ or more in the valleys will be happening.  The Cascades will get a real pounding with 5-10″ possible.  Luckily rivers are low and the ground is dry…the first 3-5″ should soak in nicely.

This entry was posted on Monday, October 26th, 2015 at 11:35 pm and is filed under Weather. You can follow any responses to this entry through the RSS 2.0 feed. Both comments and pings are currently closed.

33 Responses to Be Careful When Reading Modeled Rain Forecasts