Strong El Nino This Winter: What It Means In The Lowlands

Let’s talk about El Nino again.  I’ve already covered the basics in a post earlier this week.  I suggest you read the first few paragraphs of that posting first

First, we tend to see a changed jet stream during El Nino cool seasons.  Typically the Pacific jet stream flows generally west to east and runs into the northern half of the USA West Coast.  Thus the heaviest winter rains tend to fall in the Pacific Northwest, as opposed to California:

But during most El Nino winters we see the southerly part of the jet stream suppressed farther south, partly due to a stronger area of low pressure in the eastern Pacific.  Actually the subtropical jet is pushed farther north than normal, heading into California.  At the same time we tend to see more episodes of upper-level high pressure over the western part of Canada.  This shunts arctic air farther east than normal, giving the Northern Plains a warmer than normal winter.  Meanwhile that wet (and warm) westerly jet running into California gives them a wetter than normal winter. 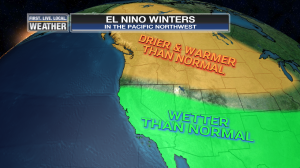 Notice the Pacific Northwest is a mix of weather.  The northern part is strongly influenced by the upper-level high, the southern part (southern Oregon) often gets in on the edge of the California moisture action.  As a result, southern Oregon ski areas and basins receive normal or even above normal precipitation.

It’s important to point out that though many El Nino winters follow this pattern, sometimes they don’t .  No guarantees!  It has also been noted that in the very strong El Ninos, the heavier precipitation appears to make it farther north.  Both 1982-83 and 1997-98 (strongest since 1950) both featured near or above normal rainfall even up here in Portland. 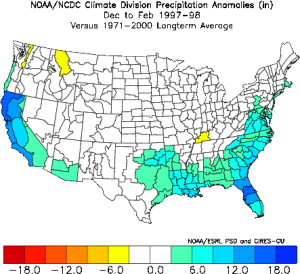 What about extreme cold during this winters?  A bit of a mixed bag because even in a mild winter it only takes one 4 day arctic blast to trash your plants.  4 out of 15 Strong/Moderate El Nino’s had a significant outbreak of “arctic” air.  If you take just the STRONG events, only one in the past 40 years has given us a days-long arctic blast event.  That was 2009-2010.  We hit 12 that year!  So the likelihood of a long arctic blast is quite a bit lower than normal, occurring in only 27% of moderate/strong years.

Of course what everyone really wants to know is…will it snow at MY house this winter???

A misconception to get rid of is that a warmer/drier winter means no snow in the lowlands.  Not true at all. El Nino does NOT mean NO SNOW.  Check out the last 6 moderate/strong El Nino winters: 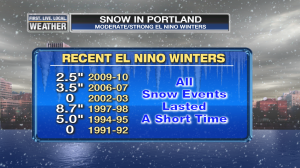 We saw decent snow storms in January 2007, January 1998, & February 1995.  And who can forget the fiasco in late December 2009…the surprise (crappy forecast) snow event that gave us the worst evening commute in many years!  There is one common theme in each of these events; they all lasted just a short time, then the mild winter resumed.  I distinctly remember shoveling feet of drifted snow (Corbett) in January 1998 under a “hot” 50 degree sun once the east wind stopped.

It’s unlikely we have a snowy/cold winter ahead, but it’s quite possible we get some sort of freezing rain or snow event at least once during the upcoming winter.

One more point…one of the most hated parts of winter for part of the metro area is the cold east wind.  The Columbia River Gorge produces what we call a “gap wind” when high pressure east of the Cascades sends air rushing through the sea-level gap through the mountains.  The east side metro area near and south of the Columbia River is fully exposed to the wrath of this wind.  It begins to appear in late October and reaches a peak from November through February.  Then the wind disappears in early March as the seasonal westerlies begin.

Does El Nino mean more or less east wind?  Based on my experience, it’s generally a case of MORE east wind.  That’s because during El Nino years, we have a split or blocked jet stream more often, leading to more time under surface high pressure.  And much of the time that’s centered east of the Cascades.  Notice the most easterly wind the past few years was during our last El Nino event in 2009-2010. 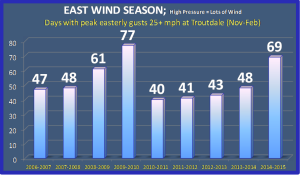 TO SUMMARIZE ALL OF THIS:

Here is a chart showing some of the data I used while researching past events:

This entry was posted on Thursday, September 17th, 2015 at 10:27 pm and is filed under Weather. You can follow any responses to this entry through the RSS 2.0 feed. Both comments and pings are currently closed.

103 Responses to Strong El Nino This Winter: What It Means In The Lowlands