I was cleaning out a file tonight here at work (slow Sunday), and found this old BPA rain map I’ve had for at least 20 years.  I think it is from Charlie Feris, who worked at the BPA for a long time.  He (and maybe someone else) had a collection of rainfall observers around our area.  Note it’s a 15 year period from the late 1960s to early 1980s.

Rainfall distribution in our area is totally dependent on local topography.  Much of the year air flow is from a westerly direction.  Where air rises over hills or runs into mountains, rainfall increases as clouds dump their load of moisture.  And the effect begins before the land begins rising too as clouds pile up ahead of the increasing elevation.  When air descends off hills/mountains, rainfall accumulation is lower.

Those of you that have lived here a long time know much of this, but it might be new info to some of you.  Take a look at the map and then I have a few thoughts below.  Feel free to add your own comments of course. 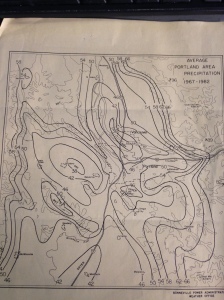 I can tell you from living around the 62-66″ location…it sure does rain a lot more in the hills.  11 years ago I moved, but only about 2 miles as the crow flies farther east in the Corbett area.  It’s noticeably wetter in the “new location”. 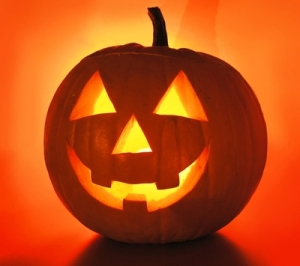 Today was sure a dark, drizzly, & dank day (like the alliteration?). The afternoon high (as of 5pm), was only 59 degrees in Portland.  That’s what we typically see in late October!  Now at 5pm it’s 59 degrees at PDX and there’s a decent chance we jump to 60 next hour.  Update:  6pm it is 60 degrees at PDX.  If we don’t rise above 60, it’ll be a record cool high temperature for the day. 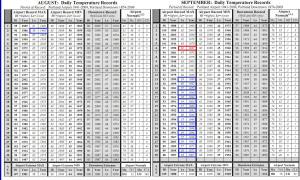 Thanks to Brian Schmit for pointing that out and the highlighted chart.  He also pointed out that  That’s a huge change from the month after month of warm/hot weather we’ve been seeing.

My 14 year old son decided to come to work with me because I told him the cool skate park near the station on the westside would be dry.  He was skeptical all the way until we hit Sylvan.  Just like going over the Cascades and leaving the marine layer, suddenly the Tualatin Valley was under beautiful blue skies and roads were dry…I think I heard angels singing…funny how the sun can lift your mood (whether it’s warm or cold) after sitting through a day of drizzle/rain and clouds.

Notice how much warmer it was today south of the ‘ol Willamette Baseline(Stark Street on eastside and Baseline Rd westside).  Low 70s in the valley…much more comfortable. 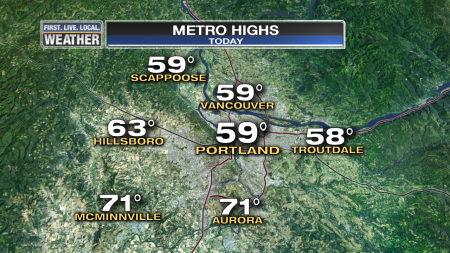