What a scorcher today; textbook “extreme heat” here in the lower elevations of southwest Washington and northwest Oregon.  Easterly wind through the Gorge and some over the Cascades gave us the extra heating to pop temperatures into the 100-105 range in the western valleys. 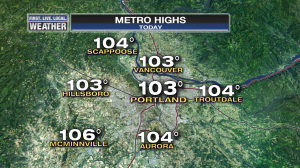 The numbers at Hillsboro, McMinnville, Salem & Eugene were record highs for the day.  Check out those coastal temps too; not hot but nice and warm.

Unfortunately, if you don’t have air conditioning, it’s going to be a warm night.  At 10pm it is still 87 in Portland, which is 4 degrees warmer than last night at this time.  We’re going for a low of 66 which would once again tie a record-warm low temperature; we did that last night at 63 degrees.

What changes tomorrow?  The atmosphere overhead doesn’t cool at all, but we lose the offshore flow.  In fact a 10-20 mph westerly wind returns to the Gorge in the afternoon.  The loss of the offshore flow (but no onshore flow) should drop our temperatures 3-4 degrees.  So…probably still a high of 100 degrees once again.  We haven’t seen back to back 100 degree days in 6 years either.

After that, a gradual cooldown over the weekend and then all models put us back into refreshing onshore flow and the hot ridge goes away next week.  Back to normal temps (around 80) or maybe even a bit cooler at times.

This entry was posted on Thursday, July 30th, 2015 at 10:52 pm and is filed under Weather. You can follow any responses to this entry through the RSS 2.0 feed. Both comments and pings are currently closed.