Hunker Down in a Cool Spot…100+ Likely Today!

Today should be our hottest day in 3 years in Portland.  The airmass overhead has warmed a few degrees, we actually have an easterly wind blowing through the Gorge, and it’ll be sunny the entire day.  By 5pm we can expect to see widespread 99-103 degree temperatures through the Willamette Valley and Portland metro area.  The last time we hit 100 was in August 2012.  Regardless of the final temp, it’ll be the warmest of summer so far.  Notice no one in the metro area has moved above 99 so far this season:

Tomorrow will be a scorcher as well, but probably not 100 degrees.  Then we slowly cool closer to 90 Saturday and Sunday. 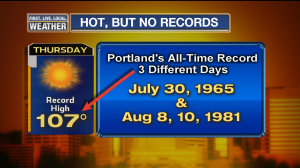 This entry was posted on Thursday, July 30th, 2015 at 9:18 am and is filed under Weather. You can follow any responses to this entry through the RSS 2.0 feed. Both comments and pings are currently closed.

47 Responses to Hunker Down in a Cool Spot…100+ Likely Today!