This weekend was sure refreshing…showers, clouds, and comfortably cool temperatures.  Of course if you had camping reservations for “the driest weekend of the year” you were probably a bit disappointed. 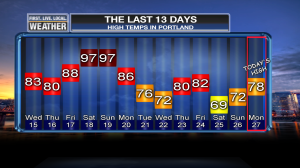 As I mentioned would happen a couple of weeks ago, the last three weeks of July have been significantly cooler than the first week or so.  The average high temperature in Portland the past 18 days has been a very “normal” 81.3 degrees.  Yet in the 18 days before that, the average high was 90.6 degrees!  Quite a swing over the past 5 weeks.

Well now it appears the large/hot upper-level ridge of high pressure is going to nudge back up into the Pacific Northwest from its current position over the offshore waters of California.  This setup causes two significant changes:  First, the atmosphere overhead warms dramatically.  At 5,000′ over our heads, the temperature warms from around 45 degrees earlier today to the lower 70s Wednesday/Thursday afternoons…an almost 30 degree warming.  Then with a strong ridge overhead, the cool marine layer is suppressed to right along the coastline.  The flow overhead turns light east or northeast; we lose ALL marine influence Wednesday-Friday. 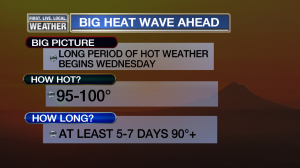 How hot?  The setup is almost exactly like what we’ve seen the past few times we’ve been close to 100 degrees this month.  Models would have us believe it’ll be only around 92-95, but all summer the effects of warmer than normal ocean water offshore seem to be showing up in a “model cool bias” during hot spells.  Due to that I went with 96-99-97 for Wednesday-Friday.  Once again this time, it does not appear to be an extreme heat setup.  I would want to see stronger offshore flow for that.

By the way, check out those sea surface temps!

Widespread 62-65 degree water temperatures all along the central/north Oregon Coast.  Wayne Garcia just told me the past few days camping at Yachats they were able to get in the water for a significant amount of time before it felt too icy cold.  Not like the normal 55 degree ice-cream headache cold stuff we are used to.

If we actually stay above 90 through next Monday for high temps, we will tie the all-time record for 90 degree days at Portland Airport.  That record is 24 days in 2009.

I don’t think this will be a LONG heat wave like the bizarre 14 day event early in the summer.  Models are trying to return some sort of weak upper-level troughing later next week.  Take a look at the ECMWF ensemble height anomaly from last night’s run.  First this week:

Week #3, about normal conditions, maybe slightly cooler than normal?  The actual operational run shows much hotter conditions than this.  Remember these maps represent an average of all the ensemble members.

Seems to indicate near normal or slightly above normal conditions.

So August starts scorching hot, then seems to return to closer to normal as we head into the latter part of next week.

This entry was posted on Monday, July 27th, 2015 at 9:38 pm and is filed under Weather. You can follow any responses to this entry through the RSS 2.0 feed. Both comments and pings are currently closed.

34 Responses to Ahead: 2nd Long Heat Wave This Summer