Spring 2015 Wrap Up: Warmest and Driest in Years

Comparing this posting to the previous summer outlook these probably seem to be reversed, but I was out-of-town when the final spring temp/precip numbers were released by NCDC.

In Portland it was the warmest spring since 2004 (11 years) and the driest in 8 years.  That said, since April we have been on track for record dry.  The April through June rainfall is the driest we have seen in over 70 years (driest ever at PDX).  Airport records go back to around 1940 and rainfall stats were in a different location before that time so it’s an apples/oranges comparison. 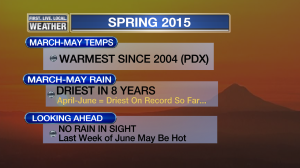 What about the rest of the region?  Temperatures nationwide show Oregon saw its 3rd warmest spring on record.

And the Cascade climate zone of Washington was the warmest on record:

We’ve come a long ways from the cold and wet springs centered around 2011.  Take a look at just the Willamette Valley spring temps over the past 100+ years and you see the huge rebound the last 3 years:

Note that this HAS HAPPENED IN THE PAST.  Check out the mid-1920s and late 1950s…very cool and then a sudden swing upwards.  I’m not discounting any manmade effects, but the point is we tend to focus on small periods of time.  I was so wound up after those cold springs that I built a greenhouse.  Wow it’s been hot in there this past month!  Seems kind of silly now, but I’m sure cool springs will return again.

Precipitation?  The bad news is that a wet May east of the Cascades was not able to overcome the rainfall deficit except in the extreme SE part of Oregon.  The spring total was still a bit below normal due to dryness in March and April:

Looking ahead, I know there has been lots of chatter about a “record heatwave” showing up on the ECMWF and to a lesser extent the GFS.  Here’s the ECMWF ensemble chart showing the insane +30 degrees 9 days from now.

Note that not a single member of the 51 ensembles was that hot.  BUT, note the ensemble mean is around +21 and look how long it is way above average (green line).   That plus other models gives me pretty good confidence that we may see a heatwave the last week of June, starting right at the end of our 7 Day forecast.

Right now our June average temperature in Portland is just barely the warmest on record.  If models are correct, June 2015 will be our hottest on record.  We’ve seen 4-90 degree days and I could easily see another 3-6…what a scorcher.  It’s also unlikely we’ll see rain the rest of the month, unless we get sprinkles tomorrow morning.