2015 Summer Outlook: Probably Warm, Could Be a Scorcher!

Is it going to be a scorcher this summer?  Not sure about that but…

MANY SIGNS POINT TO ANOTHER MUCH WARMER THAN NORMAL SUMMER IN THE PACIFIC NORTHWEST.

By “Summer” I am referring to June, July, August.

1. Very little has changed since last summer…warmer than normal atmospheric conditions have prevailed now for over a year

Take a look at the past 12 months…almost every single one has been above average with 5 of those exceeding the record in Portland: 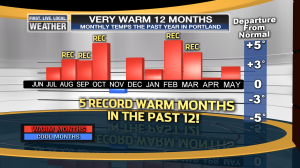 The past 120 days as well, note you can click on any of these images for a larger view. 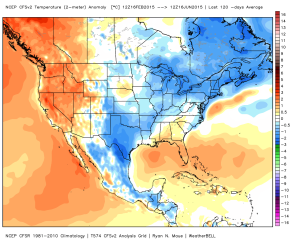 That’s because an upper-level ridge has been over or to our west/northwest for much of the past year.  It has come and gone at times, but it keeps coming back.  Some have named it the Ridiculously Resilient Ridge.  Seems appropriate.

Warmer than normal water off the coastline helped give us the warm temps last summer and boosted humidity levels at times.  Take a look at the current anomaly; that’s degrees above or below normal in celsius:

See the large area of “warm” water?  Compare it to last June:

The warm water doesn’t want to go away.  During most of the warm season our air flows in from the ocean, so if the water is warmer than normal temperatures will often be warmer than normal too.  Now you may notice one critical difference this year, take a look at below normal temps right along the coastline itself.  That’s due to “upwelling”.  With high pressure firmly established in the eastern Pacific much earlier this year (our nice but dry weather since early May), the gusty northerly winds along the coast allow a bit of a motion to the right as they travel down toward California due to the rotation of the earth (long story).  Cold water below “upwells” as a result.  Last June we didn’t have high pressure offshore as much so the ocean water was a bit warmer.

3. El Nino conditions are present in the equatorial Pacific

El Nino was just trying to develop last summer, it got going (just barely) through the winter, and now is firmly a “moderate” El Nino episode.  What have we seen in previous El Nino summers?  I looked at summers where the June-August ONI was 0.5 or greater (like we’ll see this year) for the past 25 years.

Then all the same type of years back to 1951

Interesting don’t you think?  Analog years suggest we will have a warmer than average summer.

This is a biggie.  Our numerical simulations of the next two weeks (through the end of June) are generally showing warmer than normal temperatures most of that time.  In fact there are strong indications that we may have a hot spell somewhere in the last 10 days of June.  Note the ECMWF ensemble chart shows 5,000′ temperatures well above normal through most of the period.  Normal is the green line.  There are two brief cool periods (near normal) this Friday and again early next week.

The weekly maps I posted yesterday from the same ECMWF (EURO) model showed the warm pattern continuing the next 30 days.  The CFS model forecasts above normal temps along the West Coast too…this is an average through the end of July: 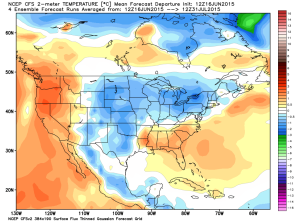 I’ve found the CFS really likes to forecast above normal temps for our area, although I’ve only been watching it closely for about two years and most of that time it really has ended up warm!  So maybe it actually knows what it’s talking about more often than I think.

Going farther out in time, here is the latest CFS forecast for July surface temperature anomaly

I’ve seen one other model…the JAMSTEC, and it forecasts above normal temps for us as well.

5.  Most forecasts I have seen are similar.

What are others saying?  The NWS agrees with a warm forecast.  The June-August forecast temps:

I’m not allowed to post it so I won’t, but WeatherBell is forecasting a very warm Northwest too…quite similar to the NWS.

A lot of you may remember Pete Parsons from his TV days at KGW & KOIN.  He’s a friend and forecasts for Oregon Department of Forestry/Agriculture.  He’s going the other way in his public forecast, expecting a cooler than average summer.  You can find the full forecast here:  http://www.oregon.gov/ODA/programs/NaturalResources/Pages/Weather.aspx

So there you have it…I have a gut feeling we could be in for a scorcher this year.  Although if the patterns set up right it IS possible to have a record warm summer, but not get extreme heat (100+).  Remember last year we didn’t hit 100 in Portland even though it was our warmest or 2nd warmest on record!  We didn’t have any strong thermal troughs to turn the wind easterly and push us up into the 102-106 range like in 2009.  Let’s hope we don’t see that again!