11pm: Storms in SW Metro Only

That was an interesting (and busy) evening.  Just before our 5pm broadcast storms popped up over the southwest side of the metro area and then gradually worked their way to the southwest and into Yamhill county.  A few other isolated showers developed near Aurora and in Clackamas county, but that was it.  The vast majority of us didn’t have rain today…too bad for my garden.

I see a MADIS station had .70″ in Sherwood, another near Yamhill had .80″ and still another near Yamhill received 1.79″!  Wow, that’s a huge soaker like what we saw last June in the West Slope area.  About 10,000 PGE customers lost power and a couple of spots likely saw .50″ hail…near King City and east of Yamhill. That’s according to radar. 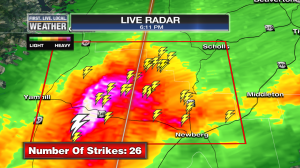 The storms didn’t produce much lightning until they pushed southwest and then suddenly spit out 50-80 strikes in just 1/2 hour!

It’s all quiet at 11pm with just a few showers moving west across the east side of the Willamette Valley.  The main action shifts east of the mountains tomorrow with the west side under a solid marine layer.  The upper-level flow will still be light easterly. It IS possible to get thunderstorms over the top of the marine inversion (I’ve seen that happen), but not likely.

So far we’ve only seen one thunderstorm in the lowest elevations…just north of North Plains.  But looking from our Skyline Cam the sky sure looks ominous.  Temperatures are in the mid-upper 70s now too which should allow SOMETHING to pop up anywhere in the metro area in the next couple of hours.

A cluster of strong storms northwest of Mt. St. Helens have likely produced large hail over uninhabited area in Lewis County.  Possibly nickel to quarter size about a half hour ago:

We’ll see how it goes the next few hours!

Thunder Today? For Some, But Not All of Us

In theory, everything appears to be nicely setup for a thunderstorms in the next 7-8 hours over the lowlands of northwest Oregon and maybe extreme SW Washington too.  That’s the theory based on an unstable atmosphere, increasing moisture overhead (precipitable water) and warm temps.  Upper level winds are light from the east, so we’re already getting a slow drift of showers developing over the Cascades and moving westward.  You can see that in the radar imagery here.  It helps that we are getting full sunshine in the valleys as you can see on the 1pm visible satellite image:

which should eventually get us into the mid 70s.  We don’t have offshore flow which is often helpful in these situations to push us to 80 or so.  I would have liked to see a nice thermal trough over the western valleys.

Now numerical weather prediction models don’t handle very small details well, like whether you get a thunderstorm but your friend that lives 5 miles down the road doesn’t get one.  But, they do give us general ideas of where convection will be and right now they sure don’t like developing much action from the metro area northward.  Here is the total precipitation through 9pm this evening from the 18z (11am) RPM model:

and the latest HRRR:

Not real encouraging eh? The 12z (6 hours earlier) RPM model had shown a few good thunderstorms from Portland to Salem, but now they appear weaker on the current run.

Keep an eye on the radar!  Movement will be very slow with these storms so if you get one you could really get soaked!  I’m hoping for that at home for my garden because we sure don’t see much rain in the next week or so.