We hit 81 in Portland today 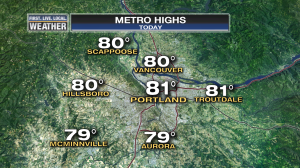 The first of the season.  Almost all of us in the metro area hit 80.  Quite a warmup over the past week! 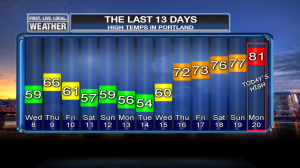 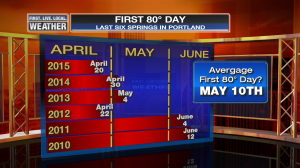 Remember 2010 & 2011?  Some were worried endless slugs, rotted veggies, and April-June downpours were the new normal.  Apparently not.  As of today, we’ve seen 5 days at/above 70 degrees, the most real warm days in April since 2009. 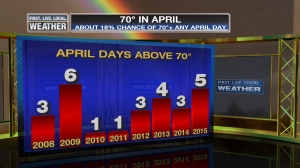 By the way, we could see the start of the Government Camp condo fire this afternoon from the Mt. Hood Adventure Park camera at Skibowl East.  Note the left side of the timelapse:

Another Smoky/Dusty Sunrise: Could Keep Us Below 80 Degrees

You’ve probably noticed the haze in the air the past 48 hours, especially Sunday. 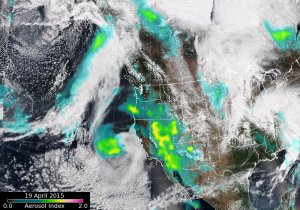 It’s smoke from fires in Siberia, with probably some dust thrown in too.  Here’s a detailed description from NESDIS (your tax dollars at work!):

A relatively expansive plume of smoke is capture in morning visible satellite imagery extending from southern Saskatchewan across central Montana, northern two-thirds of Idaho, Washington, Oregon, and northern California. This area of smoke (with a low probability of dust/sand mixed in) has been traced back to numerous large wildfires burning across Siberia. These fires produced pyrocumulus clouds that enabled the smoke to rise quickly and become entrained in the atmospheric jet stream. The first plume of smoke that has been since transported across the northern Pacific and is now located over the Pacific Northwest and southwestern to south-central Canada. Additional large detached smoke plumes were seen yesterday beginning to follow the same trajectory.

That was yesterday, but this morning the satellite image shows thick smoke over us once again.

Beijing also had their worst sandstorm in a decade from the same system that brought the strong winds across the border in Siberia:  http://ozoneaq.gsfc.nasa.gov/omps/blog/2015/04/worst-sandstorm-hit-beijing-over-decade

Cliff Mass blogged about this yesterday too:  http://www.cliffmass.blogspot.com/2015/04/siberian-smoke-reaches-northwest.html

For us, this means we have the hazy skies and slightly reduced heating from the sun.  A great example is from USFS RAWS sites.  This one from Mt. Wilson SE of Timothy Lake:  http://www.wrh.noaa.gov/mesowest/getobext.php?wfo=&sid=WSFO3&num=168&raw=0&dbn=m&banner=off

Look at the SOLAR RADIATION column and you’ll see the values each hour in Watts per Square Meter (W/m^2).  Notice on Friday and Saturday it is around 900-920 max, but then only around 830 yesterday, so maybe a 10% decrease in solar radiation reaching the ground.  That could be enough to chop a couple of degrees off the high and that COULD keep us below 80 again today.  Offshore flow is a bit weaker than I expected too…less than 2 millibars through the Gorge.

Nevertheless, a GREAT day again today with highs near 80…enjoy!