Did You See the Spectacular Sunset? Probably from Chinese Dust

Wow, did you get a chance to see the sun this evening?  I took a bike ride through the West Hills just before sunset and couldn’t believe what I was seeing on a “clear” April evening.  It was as orange and vibrant as a late summer “forest-fire” sun.  Here are a few pics, one from Amanda Parson 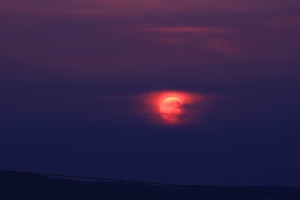 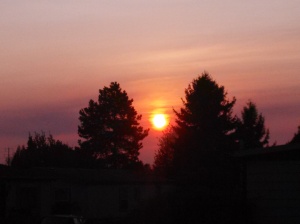 That second one clearly shows some sort of smoke or dust layer.

But the air over us is coming from the west…and it’s too early for fires from Canada.  So the next most likely suspect is dust from China/Mongolian dust storms or fires in Eastern Siberia.  I’m obviously no expert in either of these but spring IS the time we see surges of dust move off eastern Asia and some of that makes it to the Pacific Northwest.  The extreme example was in April 1998 during a warm/hot spell at the end of the month when we sat under a milky haze for days…under cloudless skies!  It was really weird.  It turned out that was from the east Asian dust.

So I just took a look at the latest product from the NASA GEOS-5 dust extinction model.  This is from this morning’s run…a 6 hour forecast: 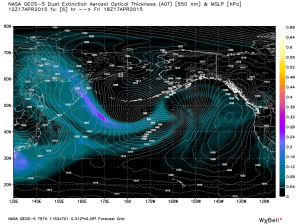 If you look closely you can see some drop in optical thickness (the blockage/scattering of light to aerosols in the atmosphere) just arriving over us with the dying cold front passing overhead.  You can also see swirls of dust upstream over east Asia.  Take a look over Asia itself and you can see windy conditions generating the dust on the model at this morning’s initialization time (unrelated to what’s over us right now): 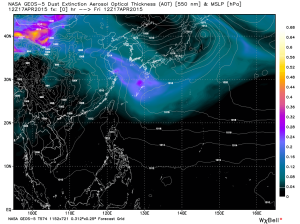 Google Earth shows the massive sandy/dusty area where the all the gunk first gets airborne: 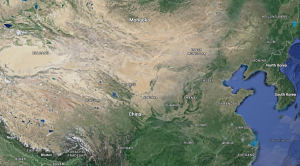 According to this model, some dust will stick around through this weekend.  In a typical spring high pressure pattern we would see bright blue skies, so it’ll be interesting to see if it’s not quite as blue as normal.

For those of you who have access to WeatherBell, the link to the NASA GEOS-5 model is here:  http://models.weatherbell.com/nasa.php

It’s possible that is in their FREE section…give it a try even if you don’t have an account.

5pm Saturday Update:  It turns out that some of what we saw last night may be from out of control fires in extreme SE Siberia.  Just north of the location on the map above…north of Mongolia and northern China.  The only issue is that these occurred only 4 days ago, which would be a pretty quick transit across a “blocky-looking” north Pacific.  Or it may be a mix of both smoke and dust since it’s from the same general area and both are caused by strong winds.  Here’s the NASA article here:  http://earthobservatory.nasa.gov/NaturalHazards/view.php?id=85707&eocn=home&eoci=nh