It’s Thursday afternoon and another run of the ECMWF model and its ensembles to 32 days in the future.  That takes us to mid-April.

Surprise!  No big changes, the pattern we’ve seen off/on for the past 18 months, and this past winter will continue.  Upper-level ridging along/near the western coast of North America and cool troughing over the eastern half of the continent.

Take a look at the first two weeks, which goes through next week and then Oregon’s Spring Break.  Strong ridging is centered to our north, which will allow some weak systems to move by to the south.  We already see this in next week’s model forecasts.

Weeks 3 & 4 which is basically the first half of April, show higher than normal upper-level heights remaining over or just west of us.  Systems that come through will be weaker than normal and temperatures should average above normal.  Early April may end up more like a typical early May. 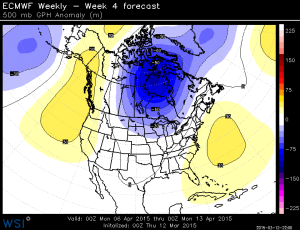 WHAT DOES THIS MEAN?  A lot for gardeners!

1. You are probably okay to plant cool-weather veggies in the next couple of weeks (carrots/beets/salad greens etc…).  Some years the constant cold and rain could rot these in mid/late March but not this year!

2. Unless there is some dramatic turnaround, early season veggies and berries could end up arriving much earlier than normal.  Like strawberries in early-mid May instead of late May.

3. You have a chance to get lots of work done outside in the next month, more so than in a typical rainy/cold spring.